I have been spending the last few days attempting to, in internet parlance, unfuck my habitat.

Okay, to be honest, I just discovered that site when I was Googling "Unfuck Your Habitat" in an effort to properly credit whomever came up with that term.  I think I'm going to need to look into it a bit further.

But at any rate, my general impression of the concept was basically doing the little, and sometimes big, things needed to keep the domicile from being a giant clusterfuck of hopelessness and disorder.

That being said, I've been engaging in the re-arranging of cupboards and drawers, filing of receipts, and purging of stuffs and whatnots.  Frankly, there hasn't been quite as much purging as I had hoped, but I can't win them all.

I've been visiting Pinterest again in hopes of picking up some DIY home organization tips, but I find a lot of the stuff involves a lot of resources I don't have on hand.  I did try this tip, which I had been curious about for some time, regarding folding T-shirts for easy access.  This is what I ended up with:

Compared to the tutorial: 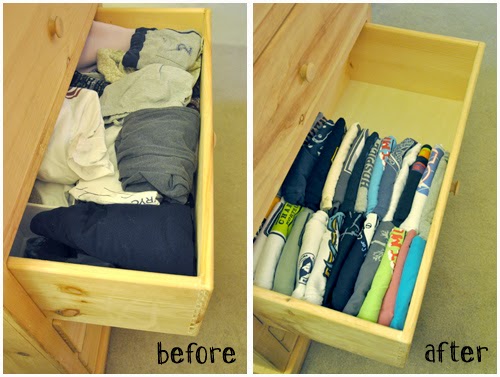 It's not a bad system.  The pictures on the original post exaggerate the amount of extra room you end up with.  Folding T-shirts in this manner doesn't reduce their volume at all - they still take up roughly the same amount of space.  The author mentioned cleaning out old ratty shirts, so maybe that accounts for the change in occupied space.

Also, the tutorials I've seen on this don't seem to account for someone whose clothing is not all the same size/volume due to fluctuating weight and other things, so unless all of your t-shirts

I do find it easier to look for something to wear though.  The real test will come on laundry day when I find out how much of a pain it will be to put newly-laundered t-shirts back in the drawers.

Sometime back The Well-Travelled One, being well-travelled and all, introduced me to the concept of rolling all your shit military style.

This I like.  I may have gone a wee bit overboard.

Yes, I can now officially say the internet has seen my underwear.

In tackling the kitchen I realized a few things:
Last night I went through all my bills, receipts, old birthday cards and came to the conclusion that I probably have enough of this crap to insulate my house should I come across an industrial strength paper shredder.

Today I intend to tackle the basement and get the rec-room area, which we don't use since we lack anything recreational to put down there (mainly a TV.. we've got about 10 game consoles to hook up to a TV, but no TV), back into some semblance of shape after the Great Christmas Excavation, known to laypeople as 'Pulling out the tree and decorations'.

Speaking of Christmas... does anyone else find it weird that right after Christmas, all the big box stores have sales on storage and organizational equipment, as if to say "Here, it's time to pack away all the useless shit we've been guilting people into buying you for the last four months?"

Email ThisBlogThis!Share to TwitterShare to FacebookShare to Pinterest
Labels: corporate greed, Half assed weekend post, holidays, home improvement, I do Pinterest, I'm geeking out over here, my boyfriend needs a better alias, rampant consumerism, This is a sorry excuse for a post