Blizzard 2014 and the great flood that wasn't.

The year, dare I say it, is off to a decent start.  We survived that vicious hell storm and cold snap, or polar vortex, as the kids are calling it these days.  Alls I know is that I have not been witness to such a blizzard since the winter of 1991 when I got sent home from school and went to my friend Corina's place instead, effectively scaring the shit out of my parents, whom I did not call at work since I didn't know their work number.  Instead I called home and left numerous messages on the answering machine, all the while wondering where the hell they were.  Meanwhile, having heard that the schools were closed, they were frantically leaving messages for me, wondering where the hell I was.
For you kids reading this, before voicemail, we used to have what were known as "answering machines", which were basically cassette recorders attached to you stationary phone (aka your landline).  Not that I expect anyone born after the year 2000  to know just what a "cassette recorder" is supposed to be.  At any rate, you could not simply call and check your message.  You had to wait until you got home, which is how we finally ended up with 20 minutes worth of "Where are you?" messages.
Long story short, cell phones for kids aren't always such a bad idea.
But, back to the present.  We survived the nearly 60cm of snow in a two day period, as well as the frigid colder-than-freaking-Mars -40 wind chills. Despite my having left ordering heating oil to the last minute and the oil guy being unable to get through for two days, we did NOT run out of heat.  The noise and struggling of the furnace over the last couple of weeks ended up being easily fixable when the furnace guy came on Friday, in spite of being completely convinced that I was going to find out I needed a new furnace because why wouldn't I?  We also found out the chimney, which we were also worried about, does indeed have a proper liner (which is necessary with oil heat) so sweet Jesus and hallelujah somebody actually did something fucking RIGHT when building this place.
Lastly, the sump pump and basement has (so far) survived the thaw and the rain that brought the snow banks down by a good foot in the course of the day, as has the roof.  Turns out the ice from last months ice storm has formed a bit of a barrier between the melting snow and the ground, keeping it from melting too rapidly and flooding us with an over abundance of groundwater, or submerging the end of the drain pipe.
So, a week and a bit into the year I am feeling very cautiously optimistic.  I am enjoying a quiet Saturday evening taking turns playing Hatris (it's like Tetris, but with with hats!) with the The Well Travelled One.  This leaves me enough time for an update, since the one downfall to this game is that we're both good enough at it that a "turn" takes about an hour or more.
Enjoy your evening, Internet. 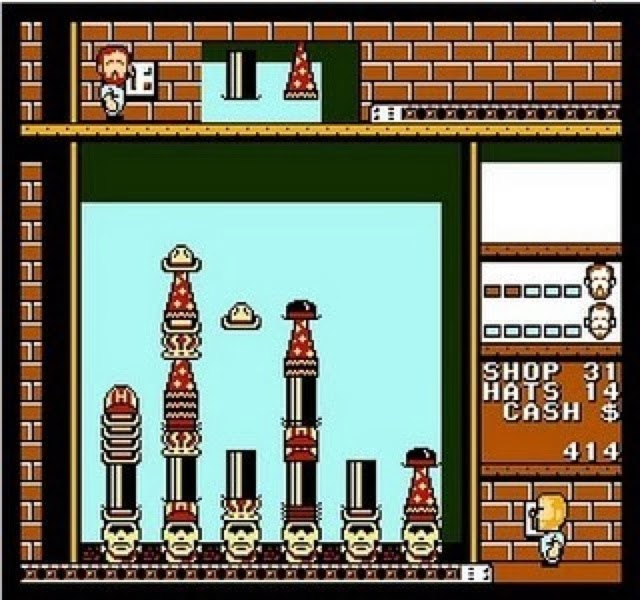 Yup.  Hatris.  This is an actual thing.  It's surprisingly addictive.
Posted by Andrea L. Cole at 9:35 PM No comments: