This was originally posted on my Facebook on August 13, 2016.

Have you ever had that feeling of being part of something infinitely bigger than yourself?

I felt that last night.

We’re an odd country, in that we have such a relatively small population, spread out over such a large area. It can lead to a sort of disconnect with our fellow citizens.

Last night’s Tragically Hip concert left me with a lot of feelings. This is a last hurrah (for me) for a band that I have loved from my early teens. I became aware of them around the time that I discovered MuchMusic, and spent hours taping recording videos to VHS, painstakingly pausing and unpausing to edit out the commentary and commercials.

“At The Hundreth Meridian” was the weird, wonderful video that first caught my eye. When I started looking into this band more, I realized I already knew them, without actually knowing them (if that makes sense). I found myself singing along, knowing words to songs that I wasn’t aware I had even heard before.

But yeah. The show. It was both awe-inspiring and exceedingly difficult to watch. The giant screens that magnify the band for the audience members relegated to the nosebleed sections show a lot of detail, including a man who was putting in a lot of effort, but was straining. I wish I could say there was the same frenetic energy of say, 10 years ago, but goddamn, he sure tried, and for most of the show, it was close. But to watch as someone who has known illness, it was exhausting.

I’m eternally grateful to the band for this tour. People can be exceptionally possessive and entitled when it comes to the artists they adore. So I want to make sure I am clear about this. They didn’t have to do a final tour. But I am so, so glad they did. I am so thankful that everyone that has loved this band got a chance to say goodbye. I’m glad the band got a chance to say goodbye as well.

But my goodness.. How difficult must this be? How difficult must it be for a man who probably knows he is dying, to go on every other night and put on the best show he can, to make that effort to live up to the reputation as a showman he’s been cultivating for the last 30 years, while knowing that it’s taking that much more energy, that much more strain, that some of the notes are that much harder to hit.

How heartbreaking is this for Robby, Gord S, Paul, and Johnny, who have been together since high school, without a single change in lineup, to know that this will for all intents and purposes, be the last tour they all do as a group. How hard must it be for them to be on stage knowing that this is for all intents and purposes it and nothing will be the same, all the while knowing and watching while they lose a childhood friend.

I was amazed that they played a 2 hour show, with two encores.

I was inspired by the way, near the end of the show, Gord stood on stage and to thunderous applause that lasted five minutes or more, looked out over the audience and just also seemed both sad, awed, grateful, and generally moved to tears. That’s when I started to cry, thinking that this must be the scene that they’ve been greeted by every other night for the last week and a bit. And it’s bloody brilliant.

The last few weeks, since the band announced Gord’s cancer diagnosis, have had surreal media coverage. It’s been a weird kind of retrospective but also like a living obituary. This tour must have been kind of like attending your own wake. Which is morbid, but also really amazing. I’m glad that the band and Gord especially, gets to see just what they have meant to so many people.

I am glad I got to be there last night. I’m glad I got to share it with some of the most important people in my life, along with thousands of strangers who, for a few hours, were my fellow mourners but also my friends. 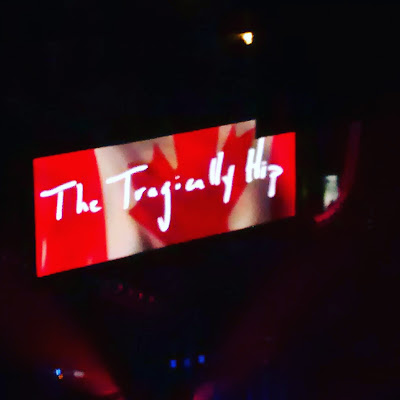 Email ThisBlogThis!Share to TwitterShare to FacebookShare to Pinterest
Labels: Bad things DO happen to good people, Cancer is bullshit, celeb stalking, concerts, gettin' all emo on ya, I am Canadian, music
Newer Posts Older Posts Home
Subscribe to: Posts (Atom)