.. Come let your socks fall down to your shoes

After months of anticipation, I caught Spoon at the Sound Academy in Toronto last night, and was without a doubt, pretty much blown away.

I picked up the Danno in P-tang after work, after checking numerous times to make sure that I had tickets, wallet, bank card (a mid-day drive back to Vic Harbs ensured that I did indeed have the plastic-money-card) etc etc, because let's face it, I forget shit. ALL. THE. TIME. We made pretty decent time if I do say so myself and I managed to navigate the 401 and the Don Valley Parkway without any minor coronary episodes. When it's not rush hour, I enjoy driving the DVP, since when you're not bumper to bumper it can be quite scenic in places. Driving along I tend to find myself overwhelmed by some of the bridges that pass over this stretch of road, if only for their sheer age and immensity. The Bloor street viaduct is kind of awe-inspiring and depressing at the same time. The high screens that stretch from one end of the valley to the other are a stark reminder that enough people chose this particular bridge from which to shuffle off the mortal coil (probably due to the heavy traffic and insane heights) that it actually necessitated the erection of these high screens to prevent precisely those sorts of 'Go-big-or-go-home' type self-inflicted deaths. 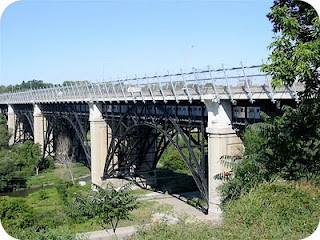 There's another bridge along this road that just intimidates and awes the hell out of me, but I can't remember what it's called. It's one or two exits north of the bridge above and every time I drive under it I get little shivers. The sheer expanse combined with the almost ancient looking pillars plunging into the valley below always make me think of the capability of humankind to create these magnificent things of beauty and function, especially in bygone eras where we relied on craftsmanship, skill and effort rather than technology to build and create.

In the past I'd considered a career in architecture but I think I'd probably be better suited to art history. I have a great interest in buildings and structures of old, but little to no interest in creating new.

Onwards and upwards. I gotta admit, I'm running on about 3.5 hours sleep, and I've had a vaguely disturbing evening that I won't get into here, so having rambled on about bridges, I'm afraid the concert portion may be a bit.. erm.. condensed? Abridged? Haha.

We got to Toronto without incident and met up with my other friend Eric. The Sound Academy is a pretty wicked venue so far as clubs go. It's located on Toronto's waterfront, near the Distillery district, and appears that it was probably some sort of industrial building at some point. About four to five different bars scattered through out the building, which resulted in very short wait times for drinks.

Oh, a short rant towards concert merchants. Carry Women's style t-shirts in Large. We're out there. You will sell them. Or, if I ask for a woman's large, LIE. Say you had some but they are sold out. Don't make me feel like a flippin' freak because I have too much dignity to squeeze myself into a medium, by saying 'Oh we just don't have large.'

The opening band, a kind of rockabilly type group called the Strange Boys, played a pretty enjoyable set. The vocals left a bit to be desired, and the last song kind of sucked with its repeated line of "I've got my parents Pinto" but otherwise it was a pretty strong performance. They alluded to having been until recently unable to enter Canada legally. I'm guessing this is less to do with criminal records and ties to terrorist groups than it is about taking minors across the border, as none of these kids looked a day over 16.

Between sets I was lucky enough to discover a sort of lounge area decorated with assorted tables and tall stools, disco balls and white leather couches. There were also screens provided so that you could watch the concert without having to watch the concert. Which is good, because although the second openers, DeerHunter, were tolerable enough, they really didn't inspire me to want to stand in a crowd for 20-40 minutes of their set.

Oh Spoon. What can I say? If you have not had a chance to listen to them, do it. If you have heard them, and you get a chance to see them live, do it. I'm not familiar with their entire repertoire, so there were a lot of songs played I didn't know, but all were enjoyable, and I was happy that I got to hear my two favorite tracks from the album I am familiar with, Ga Ga Ga Ga, Rhythm and Soul and Don't you Evah, respectively.

Managed to get home from Toronto in the dark with my lousy sense of direction without too much mishap, which is always a good thing.
Posted by Andrea L. Cole at 10:42 AM 2 comments:

A Full Week of Wednesdays.

A co-worker once shared his opinion that of all the days of the week, Wednesday is the worst. Then, this week has been full of them.

Does nursing a broken heart ever get easier?

I walked into the Wine rack on monday evening, in what was probably a misguided effort to indulge in one evening of numbing the pain of heartbreak, as I was honestly a bit of a wreck. At the counter, I began giggling as I was struck by the question: How many times a week are the employees at establishments such as the Wine Rack, the LCBO, the Beer Store faced with patrons rushing in with tear-stained faces, looking a mess and grabbing the first thing off the shelf? I imagine this is probably most common in the former, and least the in latter. Beer Stores (or, getting all retro here - "Brewer's Retail") always strike me as being bastions of masculinity, where wanton displays of emotion would be wholly unwelcome.

Get in, get yer beer and get the heck out. No crybabies here, thanks.

The LCBO simply provides too much choice for someone who is truly on edge, emotionally. It's just confusing and overwhelming. Gin or Tequila? Sweet jesus christ, I can't make these kinds of decisions now. Waaaaaah.

Wine Racks seem to be the binary opposite of Beer Stores. Soft lighting and glass and subdued labels add a certain elegance to desperation. We're not here to judge you. Go home and drown your sorrows. We won't tell.

At any rate, I must have been a sight to behold.

In the movie 'Someone Like You' Ashley Judd goes to her doctor and asks him to remove the part of her olfactory gland that associates smell with memory. I hear that, sister.

Getting out of bed yesterday morning, I nearly stepped in cat vomit. This reminded me of an incident from around the time we had met, where my state of mind was such that even stepping cat vomit couldn't break my spirits. Gazing upon the little gift left by Chloe the kitten, I noted the irony. It starts with cat vomit, and ends with cat vomit. I also noted that perhaps a visit to the vet is in order.

Fuck, I hate being a victim of circumstances beyond my control.

I'm not particularly pleased to know that this likely not the LAST time I'll go through this, either. It takes a lot of effort not to become one of the bitter. I'm trying really hard to keep believing in the general goodness of people. We're basically flawed beings, all of us. I'm trying, hard as it may be, to believe that beneath the flaws we all possess, are the best of intentions.

I'll move on. I'll regain hope. I'll probably get my heart handed to me on a platter. AGAIN. and the cycle will continue until I get it right.

The only other option is to give up, become one of the bitter and die alone. I'm not prepared to do that.
Posted by Andrea L. Cole at 1:11 PM No comments:

I've become convinced that one of my close childhood friends is now playing bass for a well known Canadian band whose name shall we won't mention, but let's just say it rhymes with shmalexisontire.

Same Name. Canadian Band. Said friend of mine possessed some pretty effin' awesome musical skill. Band formed in 2001, so the chronology could be accurate.

Said childhood friend and I lost touch roughly 16 years ago. Over the years I've been trying to track him down via classmates, facebook, google. etc. Connecting with other elementary school friends, I'd ask whatever became of him, but the question was always skirted.

I did get one response from a guy who said he was still in touch, they played in a band together. He was a little reclusive, this mutual friend said. Not a fan of passing out contact info. That's fair, I said, and passed along my own. Not another word.

So today I saw the name.. and I've been scouring the internet for some scrap of evidence - a date of birth, a hometown (all bios I find just say 'formed in Ontario, Canada) that will either confirm or deny my suspicions. Even pics are inconclusive when one takes into consideration that A) all the pics I find are either blurry action shots B) the ones that aren't feature AIF's bassist with a huge shaggy beard and C) the last time I saw this friend, he was clean-shaven.. and 14.

I'm probably way wrong, but geez.. you'd think it'd be easier to prove myself wrong than this.

Post-script: as I type this, I just saw a website that cites the band's origin as St. Catharines, ON. There you go. Mystery solved. That killed some time.
Posted by Andrea L. Cole at 8:58 PM 1 comment:

Had a good couple of sets at the Rye tonight. They've been promoting the open mike night and it's really catching on, so most nights I go I'm likely only able to get up for a three song set.

It was a *little* less busy tonight, likely due to many people either being away for the March Break or headed to licensed establishments for the night.

QUick breakdown of my setlist:

This Year - The Mountain Goats
Dog Problems - The Format (was so nervous about this one!)
Piazza New York Catcher - Belle & Sebastian
Ghosts - Laura Marling

All went well considering my throat has been subpar the last few weeks. Gradually getting more comfortable playing in public. Getting good feedback from people.

They're switching from bi-weekly to weekly jams, so you know what this means? I'm putting out a shitload in babysitting money.
Posted by Andrea L. Cole at 11:00 PM No comments:

I bought double-stuf oreos. I weigh in tomorrow. So yeah, dumbass move on my part.

I don't have much of a sweet tooth, but oreos are definitely an exception to that rule.

A friend and I discussed the age-old debate of sex versus chocolate. I think I'd actually have to pick sex. Less guilt. Plus then it's like 'OOOOhhh activity points! Now I can have another Oreo.'

If I could find a good sex:oreo balance, dear God, i would die a happy happy woman.
Posted by Andrea L. Cole at 10:13 PM No comments: