Alcohol, consent, double-standards and why I wouldn't want to be THAT judge.

Oi. The Book of Face is a frustrating place sometimes.

I've been agonizing over whether to respond to shitty things I see on Facebook or just to take a deep breath and exercise my 'hide-button' finger when I see egregious shit being posted by people I otherwise love and respect.

It's a tough call, sometimes.  Do I risk being piled on or alienating people by playing the role of feminist (or anti-racist, or pro-LGBT, or otherwise anti-oppression) killjoy? Or do I quietly keep scrolling and secretly hate myself a little as I click the 'hide' button?

Someone I especially love and respect posted this image* the other day: 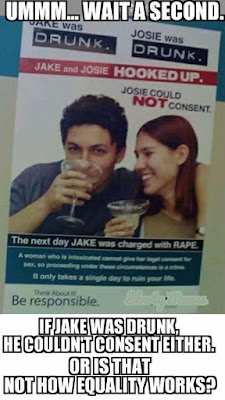 I agonized over whether to comment on this, to the point that I had a bit of an anxiety attack and ended up deactivating my account for a few days.

Yes, loved one.  Neither party in this particular infographic could legally consent.

I'll be quite honest, I would hate like hell to be the judge or jury in the rather unlikely event that the charges went to trial, because that person would be in the uncomfortable position of calling someone a rapist,or calling someone else a liar (and also, possibly, a rapist as well).

I say unlikely, because a very small percentage of rape cases actually go to trial.  Most charges are dropped or dismissed due to lack of evidence.  This case here would be a prime candidate to get dropped, mainly because of the he said/she said position and the fact that they were both drinking.  Many a rape survivor has heard the chorus of "If they didn't want it, why did they go with/drink with/get in a car with/flirt with/building a fucking sand castle with them?"  Seriously, anything to discredit the charges.

Don't believe me? Not only did over 40 women come out against Bill Cosby, he is also on tape admitting to purchasing Quaaludes to incapacitate women for the purposes of having sex with them.  And people will STILL perform mental gymnastics of Olympic Gold proportions to discredit the victims and give Cosby the benefit of the doubt. FORTY.

In a similar vein, Jake is also in a terrible position, were he to try and press charges.  He's be assumed to have consented based on the fact he's a dude.  Because male victims of rape only count when it's in prison. It sucks.  People DO need to get over the idea that women are incapable of raping men, whether through force, coercion, or incapacitation.

Anyone (male, female, nonbinary folk) who is drunk cannot consent to sex.

It's pretty simple.  Don't have sex with people who have been drinking if you don't want to be accused of rape.  People will argue that "So what, if my partner has a glass of wine, I shouldn't have sex with them?"

Having a glass of wine is not the same as being drunk. That being said, some people can drink until the cows come home and be a clear as bell.  There are also situations (medications, not having eaten enough that day) that can cause one drink to hit someone like a ton of bricks.

If you know for sure your partner is totally into it and fully consenting - ie. they are tearing your clothes off and is maybe only one drink in; maybe you have been in a relationship for years - and you know they are not operating under the influence of outside substances, then knock yourself out!

If you are unsure the person you are with is able to fully consent, maybe don't have sex with them.

If the person you are with is exhibiting any behaviour that might suggest that they are not totally into having sex with you - for example, freezing up, zoning out, making weird whimpering noises, expressing doubt ("Maybe we shouldn't.. this isn't a good idea.."), even seeming bored or distracted, use your words and say something to the effect of "Are you okay with this? We can do something else."  Give them a safe out, and if they don't take it, then proceed.  If you're still not sure they're into it, maybe don't have sex with them.

If you fear that the person you are about to have otherwise consensual sex with might turn around and accuse you of rape, then maybe don't have sex with them.

If you fear that the person you are with is going to mock you, or call you a pussy, or a cock-tease or otherwise disrespect your "No," then they are a boundary-disrespecting douchebag and maybe don't have sex with them.

You'll notice that I'm using a lot of gender-neutral terms here.  A lot of "they" and "them".  That's because these are rules that should apply to ANYONE.  No one is entitled to the sexual use of anyone else's body, male, female, genderfluid, or otherwise.

Note to my ladies:  We are also capable of victimizing men. I cannot emphasize this enough.  Please remember that. Climbing on a passed-out dude and going for a ride, that's rape.  Threatening, coercing, until you get your way... same deal.  We need to hold ourselves to a standard of consent as well.

So yes, Virginia, there is a Santa Claus, and yes, my dear loved one, that is how equality should work.  We're working on it.  In the meantime, make sure the consent you get (and the consent you give) is sober, un-coerced, and enthusiastic and things will probably be okay.

* I do want to add that the initial ad that the meme is predicated on is a problem, in the fact that it only states that Josie couldn't consent, not that neither of them could. This denies agency to women while simultaneously perpetuating the stereotype that men are always good to go, anywhere, anytime.
Posted by Andrea L. Cole at 6:48 PM No comments:

Email ThisBlogThis!Share to TwitterShare to FacebookShare to Pinterest
Labels: feminism, rape culture, sexism, social issues, The awkward, the book of face, this has been a public service announcement

And then, all at once my head exploded - or - The tale of the world's tiniest violin, which I shall now play for these poor forsaken souls

Somebody call the wahhhmbulance, already.

Is it me, or does this article sound like the weirdest kind of humble-brag?

Somebody gave this woman a platform to tell a heart-wrenching (I think that's what she was going for) sob story about how she and her husband, through meticulous planning and what sounds like a fuck-load of privilege, achieved everything they ever wanted -- two kids, some dogs, yearly vacations, and shit-damn, even a riding lawn-mower for the beautiful yard that surrounds their dream home -- but somehow, it wasn't enough.

Because now they want another kid, but the cost of another kid would disrupt their perfect economic equilibrium and send them spiralling into the void of "possibly having to downsize to a less than spectacular dream home and maybe pushing a lawnmower instead of riding it" debilitating, abject poverty in order to soothe the literal ache in her well-planned out uterus.

Don't you understand.. they might have to sell the time-share!

If I sound bitter, it's because yeah, I am. Because I, too, scrimped and saved and bought thrift store clothes and made a down payment on what was not my dream home, but simply a home, and even I can recognize how damned lucky I am that I have a roof over my head to call my own, even if said roof and attached walls have seemingly been cobbled together with high hopes, salvaged materials and sheer what-the-fuckery.

This article made me angry on a visceral level.

It is quite likely the most obnoxious thing I've ever read.

I almost wonder if we're not being trolled on a grand scale, because really, can someone really lack this much self-awareness, to not realize that there are people who cannot have children at all (instead of merely having to make a choice between a kid and a time-share).  Does she not realize the vast numbers of people who lack even a clean, dry place to lay their heads at night?

Does she think these people just didn't plan well enough?

Imagine, living off of canned food for a whole year? Buying consignment clothing?  What sacrifice!


Don't get me wrong.  There is nothing wrong - morally wrong - with working hard and planning your life out to a tee.  I'm also not going to judge people who get hit on the metaphorical head with their biological clock.  It happens, and plans change.  Wouldn't it be lovely if we all got a national platform to air our grievances when life doesn't *quite* work out how we expected.

Material or maternal, don't martyr yourself over choosing your luxury home over another mouth to feed like it's some massive sacrifice.

Shit or get off the pot, and just be glad you have a pot to piss in.
Posted by Andrea L. Cole at 11:16 PM No comments:

Email ThisBlogThis!Share to TwitterShare to FacebookShare to Pinterest
Labels: All Kinds of Effed Up, grievances, Random acts of douchebaggery, wtf is wrong with people
Newer Posts Older Posts Home
Subscribe to: Posts (Atom)