The high point of my year?  NOT having Cancer.  Which is a really, really awesome thing, but a pretty low bar to measure a whole year by.  Also, this last month the last remaining portion of my colon decided to get its shit together, figuratively speaking, and push my colitis back into a state somewhat resembling remission.  At any rate, the daily ass-bleeding has stopped for the most part.

Not having Cancer was Ay-Oh-Kay in my books, as was the reprieve from daily ass-bleeding, but quite frankly, the rest of the year just felt like a god-damn struggle.

I know it's not been all bad.  The change in mood between this post and this post from a few weeks ago can probably tell you how all-over-the-place I have been. I've been making efforts to maintain some level of positivity.  Some days are 'be thankful and count your blessings' days.  Some days are not.

On a side note: I had a pretty decent Christmas. Got to actually see my family and eat turkey.  And then every single member of my household got sick as shit for the next four days (not from the turkey, from the flu).  So while Christmas was much better than last year, the universe did it's damndest to make sure Boxing Day blew chunks (metaphorically).

So, now that we've got all that bother out of the way, some plans and resolutions for 2015:
So that's all from this end for this year.  Here's to new beginnings.

Email ThisBlogThis!Share to TwitterShare to FacebookShare to Pinterest
Labels: Cancer is bullshit, fizz ed, friends, goals, grievances, holidays, jaded and cynical me, life in general, the diet industry can kiss my fat ass, why yes I would like some crackers with my wine

Wherein I extend on an already rambling Facebook status

So, I've been running the art blog for about a week now, and it's created this weird paradox of motivation wherein the blogging motivates me to paint more, while the painting has motivated me to blog more.. Not only on the new blog, but on this blog as well.

I've been reviewing a lot of my old work, and revising some of it, taking the time to really put care into details and not rush to finish a picture all in one night.  There are a lot of pieces I feel like I could have done better had I taken more time.  Others are just kind of horrendous to me now, and I'm not sure whether I want to try and fix them or hide them away forever, never to be seen again.

The current work in progress is one I did some time ago.  I reached a point where although I knew it wasn't "done," I had hit a point where I really liked what I had done so far, and was nervous to go any farther lest I manage to fuck up what had been, at the time, a very challenging piece for me.

I've pulled it back out and after much hemming and hawing about whether I really wanted to mess with it, I've gone back in.

It is so worth it.  I am really, excruciatingly excited.
Posted by Andrea L. Cole at 10:39 PM No comments:

Today, the basketball house league that my youngest daughter plays in had their end-of-season parents vs. kids game, and because I am a sport (and a bit of a masochist, it seems) I took the opportunity to face on a group of 10-12 year olds with more athletic ability in their pinkie fingers than I have in my, well, everything.
I played for three periods, then had to quit, because having your mother quit halfway through a bonding experience HAS to be less traumatic than watching your mother drop dead of a coronary in the middle of a gymnasium.  I also developed one hell of a cramp in my right leg, as my calf decided it was going on strike for the rest of the day.
But overall it was a fun experience and I learned a few things:
- I am not as bad at basketball as I imagined myself to be. Oh, I'm not even close to being good, but I did manage one basket (was I stoked? Mister, you better believe I was STOKED) and not once did I find myself curled up in the fetal position or running with my arms covering my head.
I used to have what is referred to elementary school phys. Ed. circles as an intense "FEAR OF THE BALL".  I credit three years of kick-boxing for helping me get over that.  Once you've taken a round-house kick to the face, a mere basketball is a nuzzle from a kitten.
- my kid is fast.  Like, I knew theoretically that she was fast, but after being tasked with actually having to keep up with her, she is FAST.  Holy crap.
- I am old, fat and out of shape.  The old part, I am totally cool with. The fat part, well, I'm still unlearning a lot of toxic shit, but am gradually becoming at peace with my shape and size.  The out of shape part is not effing cool.  Not cool at all.
So I'm going to get on a new workout plan. I've been swimming lanes three times a week, but I think I'm going to hit some Boxing Day sales and find myself an MP3 player and dedicate myself to walking again, as well as joining kickboxing again, once a week at first.  Hopefully if my schedule can handle it I can move up to twice.
My goal is to get back to a similar fitness level as I was before the whole Cancer thing.  Wish me luck.
*******************************************
In other news, the original title to this post was going to be "Michael Jordan, I ain't (Hal Jordan, maybe)" as I was thinking Hal Jordan played the old guy on Evening Shade, but turns out that's Hal Holbrook, I think, and Hal Jordan is the secret alias of the Green Lantern.  So, I figured that comparing myself to a superhero rather than a professional athlete wasn't so much self-deprecating (which is what I was going for) as just kind of arrogant, and that I needed another option.
I considered changing it to Tracy Jordan, but worried that may have been appropriation, and in light of recent events, pretty fucking insensitive.
So I toddled off to the Goògle to search "Famous people with the last name Jordan" and you know what? There are way too many porn stars with that name, which is something I never needed or wanted to know, but now I do and you do too.
You're welcome.
Posted by Andrea L. Cole at 11:29 PM No comments:

Email ThisBlogThis!Share to TwitterShare to FacebookShare to Pinterest
Labels: fizz ed, goals, I am not proud, kids, life in general, sports

The difference a year makes...

My two favourite holidays were both a pretty huge bust.

On Halloween I was sick as a dog.  Regular sick, on top of being scary-Cancer-sick. My National Lampoons Christmas Vacation's cousin Eddie costume was kind of crap.  No Zombie Walk.  Didn't decorate.  Cancelled my Halloween party because I couldn't deal with the stress of hosting while dealing with impeding surgery.  I missed out on trick-or-treating with the kids and had to get up at 3 am so I could drive to Toronto and have a rather important organ removed.

Christmas I was still in recovery mode, although I was back to work part-time. My tree had but two piddling LED lights.  On Christmas Day my car battery died, which didn't matter much since my ENTIRE FAMILY got sick with a stomach bug and I couldn't be around them for fear of catching it and potentially blowing out my newly re-attached colon.  We ended up having pizza since there was nothing in the house to eat.  I cried a lot that day.  I don't think we did our family Christmas until almost, if not after, New Years.

This Halloween I decorated the shit out of my house. There was blood and skulls and fake corpses galore. I positively revelled in decorating and gathering materials for my Radar O Reilly costume as I recalled my bitterness the year before.

Today is December 17th. I just finished putting up my tree, with the help of the girls and my friend's children.  It's got a full contingent of lights, and even a few gifts under there.  My shopping is about 75% done, and I've yet to panic about the money, unlike years past.

Last year, I gathered all my energy to attend my staff Christmas party for at least an hour. This year, I was able to dance well into the night.

I feel relaxed, yet incredibly appreciative, of everything I have right now. 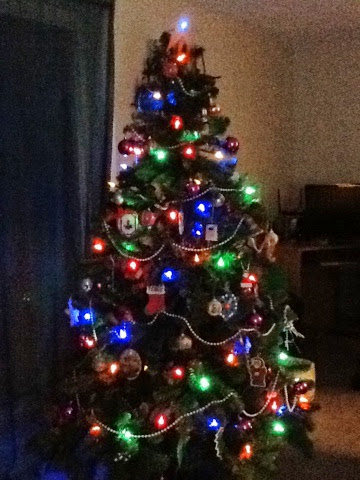 In other news, I've started a new blog for my artwork at actuallyacollection.blogspot.ca

Please feel free to check it out and give it a follow.

Email ThisBlogThis!Share to TwitterShare to FacebookShare to Pinterest
Labels: Cancer is bullshit, gettin' all emo on ya, holidays, life in general
Newer Posts Older Posts Home
Subscribe to: Posts (Atom)