Everything I Ever Needed to Know About Canadian Geography, I learned from Twitter.

Hilarious trending topic on Twitter today - #badprovincialmottos  Let's all come up with the worst provincial mottos we can think of.

Prince Edward Island: Our Dirt is RED. And yeah, Potatoes.

Favorites from other Tweeters

Alberta: We Gave you Nickelback.  You're welcome.

Saskatchewan:  As Flat as Your Nine-Year-Old Daughter

Labrador: Not technically a province, but we try!

Alberta: We're Not As Racist As We Used To Be

Newfoundland: where everybody knows your name but outsiders can't understand you when you tell them

Manitoba: It's not always this cold. Sometimes it's colder.

Alberta: Oil, a fuckton of Conservatives and Nickelback.

Ontario:  Self-proclaimed centre of the universe.  Is really big.  People don't know what our capital is.

New Brunswick: It's there, and it's not Newfoundland

Labrador: Technically not a province.  Kind of like that family member that no one likes to talk about.

Nova Scotia:  Named after a bank. Had a big explosion once.  Shaped like a lobster/penis.

Northwest Territories: Not quite a province.  Also Cold.

Nunavut: Still Cold.  No one can pronounce its capital (Iqaluit)

For your convenience, I've compiled a map of our main exports, by province. Click to Enlarge. 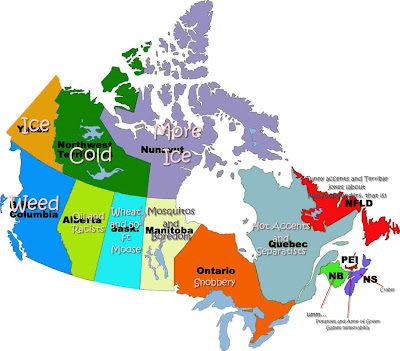 *No, really.  Think about it.  In the context of Mother Britannia, the United States is the kid that ran away because they didn't like the rules.  English Canada is the kid that stayed at home until they finally got told to "..get the hell out, get a real job because you're not staying around here, playing your video games all day and get a haircut, ya hippie!"  Quebec is the angry stepchild who didn't ask to be there anyway and "...besides you're not my real mom!!"
Posted by Andrea L. Cole at 6:33 PM

Email ThisBlogThis!Share to TwitterShare to FacebookShare to Pinterest
Labels: But I'm huge on Twitter, geography, I am Canadian, I make my own fun, I'm going to hell, the funny