I have an axe to grind..

Started on my yard work today after a miscommunication resulted in my afternoon opening up.  A whack of smaller trees on the back of the property fell down so Reegs and I spent an hour or so dragging the broken limbs over to the fire pit.  Unfortunately, some of the fallen branches are too thick for me to break down into smaller chunks by hand, so I'll need to chop them.  Right now my rusty little hatchet is about as threatening as a Nerf bat.

I also managed to fashion a working leaf rake out of the two leaf rakes that got broken last fall, due to neglect.  So I'm a handy-freakin' woman.  I've also managed to make banana muffins, a big batch of spaghetti sauce and completed a backdrop for Tee's play for school.  They're doing 50 Below Zero

, based on the book by Robert Munsch and needed a background for the outdoor scene.  Since I'm pretty sucky on that whole 'volunteer-parent' thing, I thought "Hey, this is somewhere I can contribute!"

So the moral of the story, I should let the kids have friends over more often, because when they're occupied, I get shit DONE.

I welcomed back clothesline season by doing about six thousand loads of laundry.  Two weeks worth of clothes, plus two loads of sheets and a couple of comforters.  I've even got lunches ready to go for tomorrow.  I have to call the insurance company tomorrow to see what the freakin' deal is with my car, because it's been over two weeks and I'm still driving the rental around.

Unexpected visit from the most recent ex, who was in the area visiting friends.  It was.. pleasant.  I dunno, for the first time since everything really went to shit, I felt like we might actually be able to maintain a friendship.. one that doesn't fuck with me emotionally but rather one where we really are just friends, nothing else.

I've been blogwarded by Bruce at Just Another Day In Paradise 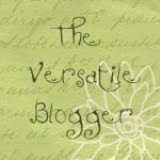 I recently came to the conclusion that my blog suffers a bit of an identity crisis as it does not know whether it wants to be a humour blog, a feminist blog, a mommy blog, a music blog, a creative writing/poetry blog or what.  I'm pretty all over the place.  But if others want to call that 'versatile' well who am I to correct them, right?  So thanks Bruce!

7 randoms about me.  These get harder to come up with.  I've also found this in conversation.. being prevalent on the interwebs means I have no material for face-to-face conversations and small talk.

"Did I tell you I...?"  "Yeah, you blogged/posted on Facebook/tweeted about it last week."

Hoo boy.  Random facts.
Sorry folks, five is all you get. I'm going to hold off on passing this on too, because I'm tired and I get all worried that A) I'm going to insult someone by leaving them out or B) I may pass this on to someone who is not prepared to take on the awesome responsibility of blog award recipiency.

Taking a page from Lance over at My Blog Can Beat Up Your Blog, I'll leave all y'all with a little tune.  This is a live version of Courage, because I can only get the official video through that stupid Vevo thing that tacks a friggin' 40 second commercial at the beginning.  Besides, watching Gord Downie perform live is usually a thing of beauty.

Email ThisBlogThis!Share to TwitterShare to FacebookShare to Pinterest
Labels: art, blogging, family, Half assed weekend post, hobbies, I leave the food prep to the professionals, life in general, music, relationships, The awkward, the happy, weather