Short one tonight.  Woke up this morning feeling rather ill.  Sore throat, headache, general malaise.  The girls had stayed the night at their grandmother's so I got up, begrudgingly put the living room back together after yesterday's elephant stampede, while whimpering every time I unconsciously swallowed, which when I have a sore throat, I tend to to every 30 seconds or so.  Upon hearing of my illness, Mom said the girls were no trouble and that they could stay at her place as long as I needed so I can rest.  So after getting the living room back together, taking a few glances at the girls' pristine bedroom to remind myself why it was all worth it, filling the sink with dishes that wouldn't get washed until a good couple hours later and listed two new items on my Etsy Store, I curled up on the couch and pretty much killed the rest of the day watching TV until Dad brought the girls home.

I think my Playstation 2 is on its way out.  I stopped buying actual DVD players some time ago, as the girls are pretty rough with them.  Being a gaming system generally designed for kids and teenagers, the PS2's a lot more durable than your average DVD player, so when my last DVD player hit the skids, I just used the PS2, but now I'm finding that it's having a hard time reading a lot of discs.  It's lasted me about three years though, which is pretty good for a second hand system, I think.

So that being said, I got through most of Season two of The New Adventures of Old Christine

(PS2 couldn't read disc one after two episodes) and as a result have developed a dirty crush awkwardguy crush on Hamish Linklater who plays Christine's brother Matthew. 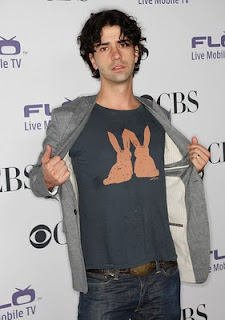 Yes, I haven't done one in a while, so here's another Reverse Objectification post.  I know it's not thursday but I think these are just gonna be kind of random.. or loosely based on my ovulation cycle.

Bed now.  Work tomorrow, possibly, unless things take a turn for the worse.
Posted by Andrea L. Cole at 10:22 PM