Two movie reviews, a rant and an awesome link.

Just finished watching the second of two movies that a friend of mine burned a couple of weeks ago.  It's difficult finding time to do something as simple as watching a movie anymore but I got through them.  My thoughts:

The Runaways (B- oh, and my grading system is pretty arbitrary in case you were wondering)

Not a bad film, but of course with me, you can't go wrong with rock biopics.  It's the first time I've seen Kristen Stewart in a movie and I haven't wanted to punch her in the face, so good on her for that one.  I found her very believable as Joan Jett.  Let's put it this way.. with Dakota Fanning, I was watching Dakota Fanning play Cherie Curie, whereas I just felt like I was watching Joan Jett with Kristen's performance.

I had a hard time getting around the meta-teensploitation ick factor.  They're basically documenting how the Runaways as a band were exploited for their jailbait sex appeal by having Stewart and Fanning make out.  Weird.

That being said, I still thought it was a decent film.

First of all, since i first saw Highway 61 I've maintained that Canadian cinema is horribly under-rated.  Secondly, I'm officially adding Jay Baruchel to my list of awkward weedy shy-boy crushes.
It was probably inevitable.  I thought the School admin's were a little too caricaturistically evil, since in real life a lot of teachers and principals are also pawns of the larger system.  But that didn't take away from my enjoyment.

Did I mention Jay Baruchel was fantastically awkward?  he may out-awkward Michael Cera.


So yeah, both pretty good films.  I saw the best friggin' thing on Etsy today.  I work in an office building that shares a parking lot with the Parole office (who have claimed about 15 reserved spots), a couple of smaller businesses and a Tim Hortons.  We have about 10 reserved spots, which was great when we had about 10 employees but now it's closer to 20, and we have to battle for spots.  So it's exceptionally frustrating when I come to work in the morning to this: 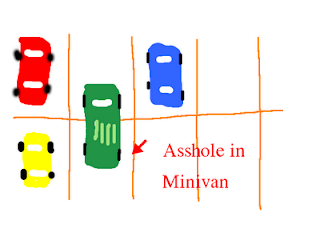 Or even more infuriatingly, this: 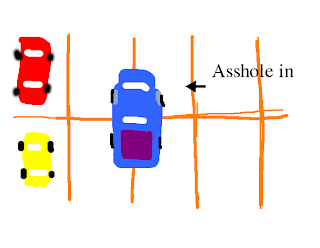 Anyway, I digress.. I've been looking for a nice passive-aggressive way to deal with this particular brand of jackass, and I think I may have found it:

Fuzzy Cute Bunnies with a Dark Side


Yes, ladies and gentlemen, handy little cards you can stick on someone's windshield just to let them know what a huge douche canoe they are for not being able to take a couple extra seconds to make sure other people have a place to park.