Disinformation, Douchebags, Disney and Why You Shouldn't Fuck with Saskatchewan.

The new Facebook newsfeed has some downsides (gee, really?), one of which is that from time to time I'll get something on my newsfeed that a friend has commented on.  I want to weigh in, but since the original poster is not a friend of mine, I can't.  Once again, in the wake of the new changes, we're getting the ridiculously asinine reposts about how Facebook is going to start charging and blah blah, repost and you won't get charged.

And people repost this shit.  It's enough to make my head explode.  But here is what I have a real issue with: 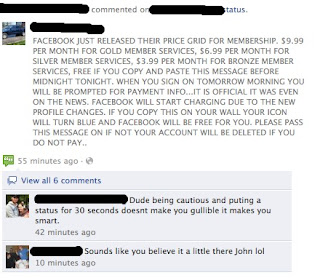 Newsflash, commenter number 1:  Spreading misinformation does not make you smart, it makes you an asshole.  Check your sources before reposting this inane shit, thankyouverymuch.  The friend of mine that commented on this, thus exposing me to this other person's dumbassery via my newsfeed, had a very reasonable suggestion - check snopes.com if you are unsure. At LEAST take the time to do a quick Google search.

Again, it is NOT smart to repost shit 'just in case' if you don't have your facts straight.  In a case like this the worst that will happen is that you'll piss off some people, and maybe lose a few e-friends in a fit of annoyance, but the possibility may arise that someone will re-post something that is hurtful, oppressive or downright untrue and may be harmful to others.  Adam P. Knave posted a great article about the dangers of spreading misinformation through social media last week and puts it more eloquently than I have here.   Recommended reading, indeed.


******************************************************
As a sociologist with a great interest in popular culture, it's usually a lot of fun to Disney bash, what with the various Disney princesses and their tropes and unrealistic messages of storybook romance.  However, in watching an older DVD with my kids tonight, I was reminded that they're not all bad.  Disney, after all, also gave us Kim Possible which to date is one of my favorite female fictional character geared towards kids.  She's loyal, smart, ass-kicking and genuinely wants to help people.  And although Ron plays the mostly bumbling sidekick, he has his occasional moments of glory, and is secretly a highly-trained ninja, and is often the more zen of the two (except in the face of monkeys).  I love that they end up together without a lot of the typical nice-guy-pines-for-hot-girl-and-continuously-cajoles-her-into-seeing-what-a-great-catch-he-is-because-he's-so-nice storyline.  No, Ron values Kim's friendship and happiness overall (and vice-versa) and that desire to see her happy is his motivation.
He's like the Ducky (from Pretty In Pink) of the coming generation, without getting fucked over for boring-as-drying-paint Andrew McCarthy.
Did I mention that the main villainess is pretty effin' cool as well?  Of the many cartoon villains I've seen in my time, Shego remains one of my favorite, with the best villainous one-liners - ("Pleased to beat you!").  She's kind of an interesting commentary on the glass ceiling and being taken less seriously in her field as a woman in spite of the fact that between her and Dr. Drakken she's clearly the brains AND the brawn of the operation, but is woefully under-acknowledged and mocked for being a mere sidekick.  I love when she gets to rule a particularly dystopian future in A Sitch In Time.

I will add that everytime I image search Kim Possible, some of the fan art never fails to destroy my soul, piece by piece.
*************************************************
Based on this post, it has become clear to me that we have a need for a new genre of music which I have decided shall be called 'DoucheRock'.  Theory of a Dead Man is the latest to delve into the land of mysogynist arena rock, which frankly, hasn't been remotely cool since Axl started braiding his hair.  I'm not surprised when you consider how heavily they take their influence from Nickelback.  I'm glad I stopped listening to Rock Radio (ie Rock95, I'm looking at you) so I don't have to hear this kind of crap. And I thought Buckcherry's "Crazy Bitch" made my teeth itch.   *shudders*


************************************************
Lastly, I got a good giggle at this video posted at the Fuck Yeah CBC Tumblr.  My future husband, George Strombolopolous finds out the hard way that a) you don't fuck with Saskatchewan b) You definitely don't want to make 'flat' jokes and c) Word travels fast (and haphazardly) in the Canadian entertainment industry.  This clip was the intro for the 2007 Gemini awards.  It's got a lot of awesome cameos from Brent Butt and Eric Peterson of Corner Gas, the cast of Little Mosque on the Prairie, Sue Johansonn (aka Sunday Night Sex with Sue), Colin Mochrie, Rick Mercer and more.