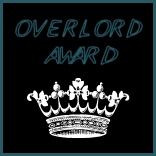 I've just been given the Overlord Award from Bruce and Tucker the Puppymaster at Just Another Day in Paradise.

Three things that are gonna change now that I'm calling the shots:

First order of business:
People who blare their car stereos in parking lots at ungodly levels are to be placed in an echo chamber with their car stereos at full-volume, extra bass until their hearts explode in their chests.  (Yes, this is a BIG peeve of mine).

Second order of business:
It is now completely acceptable, legal and okay to, with complete impunity, slam those people who stand directly in front of building doors with said door, especially if said door has a large 'No Loitering within 15 meters' sign right in front of it for the purposes of preventing people from standing in front of said door in the first bloody place.

Final order of business:
There will be a 10 year moratorium on any film remake, reboot, or reimagining.  Also included in the moratorium  are prequels and extraneous sequels (unless based on a series of books, this limits filmmakers to one sequel per film) NO SEQUELS SHALL BE MADE TO FILMS OVER 20 YEARS OLD.
Addendum: There will be no more live action movies based on beloved children's cartoons.  No more.  Just stop.  Really.  No. Really.  Knock it off.

Sadly my rule is a short-lived one, but I now get to pass my Overlord crown along to three lucky successors

Lori at Little Scotia/Vintage Witch, because she would be a benevolent overlord who would leave encouraging notes even when her minions do stupid effed-up shit like leave behind plastic containers from the recycling even though they are CLEARLY marked 1, because hey, she knows we're all trying our best here.

Lance at My Blog Can Beat Up Your Blog, because as overlord I am sure he would have some of most heinous 'popular' musicians of our times drawn and quartered in the town square for all us elitist music snobs to watch and cheer.  And I'm totally down with that.

D'Artagnan at Support Your Own Agenda because his blog title indicates that maybe he's already got plans for world domination, and I admittedly have a bit of  a blog-crush on him.
Posted by Andrea L. Cole at 12:12 AM

Email ThisBlogThis!Share to TwitterShare to FacebookShare to Pinterest
Labels: blogging, grievances, movies, pimping, Random acts of douchebaggery, When I grow up