The Problem with "Happy Holidays"

Really?  I heard a radio program this morning bemoaning the growing acceptance and tendencies towards acknowledging the 'holiday season' instead of just Christmas.   Later, I was struck by a couple of articles relating to the backlash against the use of the greeting "Happy Holidays".  The first from Vicki at Glitterfrog tells of her experience of witnessing a woman at a local store berating the cashier for wishing a 'Happy Holidays' instead of a 'Merry Christmas'.


She berated this cashier for attempting to "take Christ out of Christmas so she wouldn't offend some Muslim". Notice the quotation marks. That means it's a QUOTE.

First, I'm not sure Jesus would have had such an issue with making an effort to include others.

Now as you may know from my Halloween rant, I'm not a fan of taking away from people's right to celebrate holidays and I don't think we should take away from traditions for the sake of a level playing field.  But the thing is, saying "Happy Holidays" or having it said to me, does NOTHING to take away from my ability to enjoy Christmas.

The truth of the matter is that there is more than just one holiday this time of year.  There's a veritable shmorgasbord of different celebrations in and around the month of December and personally, I think Happy Holidays is more than appropriate.  Why get all up in arms about it?  Are folks afraid that we're going to lose our precious white judeo-christian privelidge by utilizing a more generic greeting that allows everyone to take part in the warm fuzzies of the season?"

I've been asked before "Doesn't it make you mad that you have to say Happy Holidays or Seasons Greetings?"

First off, I don't have to.  I'm totally within my rights to operate on the assumption that everyone operates on the same belief systems.. but I don't.  Because people don't.  And yeah, a lot of people would be fine with me saying Merry Christmas even if Hannukah or Kwanzaa or Yule was more their thing.   I myself have never been berated by anyone for wishing a Merry Christmas, not knowing that they may not celebrate.  A few years ago, however, have an incident where I enthusiastically told one of my University profs to have a great Christmas, with a response of a raised eyebrow and a 'Uh.. yeah.. you too.' and a vague air of awkwardness.  This prof had made mention in class a number of times of his Jewish heritage, so irritation towards my faux pas was understandable.  As he walked away I remember slapping my forehead and calling myself a jackass.  That was when I changed my mind on the 'Happy Holidays' thing.

So no, it doesn't make me mad at all.  Why fuss over something that's still essentially just a nice thing to say to people?


Vicki was saying that we've gone too far when we rip someone for saying Happy Holidays and I absolutely agree.  I may be wrong, but isn't that person saying something NICE to you?  It's not like they are telling you to "Have a Shitty Day and Go Fuck Yourself!"

As well, the people such as the woman in Vicki's store who are up in arms about the Happy Holidays thing 'taking the Christ out of Christmas'.. well, I think you may be better served getting up in arms at Corporate (North) America who have long been taking focus away from the (chronologically innacurate) birth of Christ and placing it solely at the altar of mass consumerism.  Let's not even get started on the decidedly non-Christian and very Pagan symbols and rites that were long ago appropriated for the season.

I'm no theologian, but based on what little I do know about Jesus' teachings and the 'true meaning' of Christmas, I think Happy Holidays or Season's Greetings or any such thing that takes into consideration the reality that not everyone celebrates Christmas is in and of itself a way, through simple consideration of the feelings of others,  of promoting Peace on Earth and Good Will Towards Your Fellow Man. 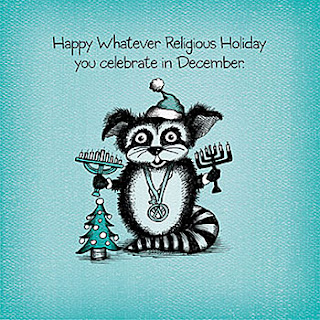