Has it come to this?

I hate this time of year.

Way too many bad memories associated with it, and I find it one of the loneliest times of year.. the Christmas letdown, New Years Eve, which is a big fuck-off ball of wrist-slitting fun, hell right up until Valentines day.  In the past, I've been subject to fits of depression around this time of year, and rightly so, when you consider what some of my past New Years' have been like.   The last two years haven't been too bad, last year because around that time period I had met the most recent ex, and the year before that I was embroiled in a bit of drama which although mildly stressful, kept things interesting.  My dark moods tend to come with boredom and loneliness. 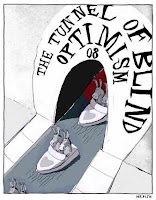 In an act of desperation/morbid curiosity/boredom/blind optimism I reopened my Plenty of Fish profile.  Jesus H. Christ.  What a sad place that is.  Honestly, I'm not sure how long I'll be able to leave it up.  First, it took all of a half an hour to discover-most-recent ex on there, and that was fairly traumatizing, and second, I also discovered a dude that I had been talking about a year and a bit ago who turned out to be a bit of a whackjob is lurking around too.. and POF's security settings don't allow you to block someone until they've messaged you.  LOVELY.

So many damaged, jaded people.  So many 'nice guys' (find out more about my issue with 'nice guys' here).  So many people with laundry lists of what specifically they are looking for in a woman.  One guy even referred to 'Attributes'.  Fellow co-workers will understand why this terminology makes me laugh.  Compare these brands and models.  Oi.  So many cheesy topless pics.  Seriously guys?  So much about what they want, and what they desire, and what they REQUIRE, but so little about who they are.

SO many people desperate to reach out and be a half of a whole.  There but for the grace of God go I and other such blather.  Oh, wait...

I give it a week.

In the meantime, a well-suited musical interlude (have I sunk to a brand new low?):