The Bechdel Test for Women in Movies


A friend of mine recently posted a link to this short, but very interesting video regarding the Bechdel Test for Women in Movies.

As outlined in the video, these are criteria used to gauge female presence in a film summed up in three questions:
In going through my own video collection, as I was apt to do after watching this clip, I was surprised how few films even made it past the first question.  I was also surprised how many that did make it past were kid-oriented.

Here's a short list of the few movies I own that, to the best of my recollection, pass this test: 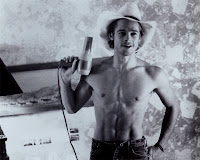 Let's just take a moment to relive that particular moment, shall we?

I found a lot more kids movies met the criteria... I'm not going to go into detail, but some of the ones that we own that passed muster include:
Anyway, I dare you all to take a look into your own collection and see what passes.