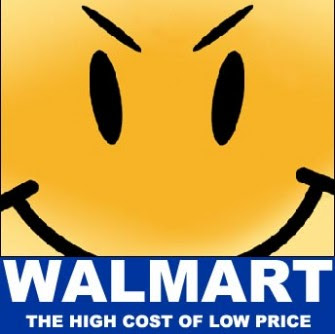 I have just been to the seventh circle of hell and back. I took my girls back-to-school shoe shopping, and I did it in one of my most hated, godforsaken encampment of the damned, Wal-Mart.

Last summer I made a conscious decision to de-Walmart my life, based on a desire to support local businesses that have floundered under the corporate mega-giant's reign of terror in the greater midland area. The general worry when a Wal-Mart moves into a semi-rural area is this:

Wal-Mart Moves In.
Local Businesses are Unable to compete with a giant corporation and its cheaper merchandise and shoddy employment practices.
Local business gets shut down. Only jobs available are at.. you guessed it.. walmart.
Local Economy goes bankrupt. Can no longer afford to shop at Wal-Mart.
Wal-mart shuts down.

Now we have an economic black hole and all those lovely social problems that go with it. Yeehaw.

However, I'm a mom on a budget and as a friend of mine put it.. "I'd like to save the world, but sometimes I'm broke and I just need a T-shirt" So every so often in times of desperation, I suck in my breathe and try to get in and out of there as fast as possible. Back to school shopping combines some of my other favorite things that make my teeth itch:
I don't mind shopping with one kid at a time, but both of them together and it's sensory overload, trying to watch them both as they run off in opposite directions, trying to hear them both as they talk to me simultaneously about two different subjects, trying to scold them both for touching, touching always TOUCHING CHIT.

I swear to christ, my oldest daughter is not content unless she has lain hands on every last piece of merchandise in any given aisle. I've threatened to tape her hands together in stores. To a lesser extent, I have made her walk with her hands clasped behind her back.

So yeah. Not my favorite Past-time. Add to this the lovely lurking 'helper' who shadowed us through the shoe aisle. Note to folks in customer service: Be available, but don't lurk. It's creepy and annoying, and you give off the vibe that you believe the 30-something woman shopping with her two children are about to rob the place blind. Seriously, knock it off.

And don't yell at my kid.

Yeah. This woman openly berated my oldest for not taking the shoes off properly. Laid into her, telling her "I have to try and sell these I can't if you're gonna wreck them!" at which point I turned and said "Uhm. she's TRYING THEM ON." Admittedly I misunderstood the issue.. I thought she was accusing T. of simply playing with the shoes when the issue was that she, in kid fashion, was taking them off with the opposite foot, like they tend to do.

So, yes. Creepy lurker lady had a point. But hey, I'm the parent, I'm present... maybe try addressing ME instead of laying into my kid, okay? Laying into them is MY job, thankyouverymuch. Needless to say, I was pretty much livid.

It's a horrible Jekyll and Hyde transformation I go through when forced to enter one of these places. Granted, a lot of it has to do with the fact that I usually only go when money is tight, so that's probably a factor in my overall grim mood in these places.

But Hey, I survived. Last year I managed to avoid the place straight through the xmas season, and I'm hoping through careful budgeting, and a lot of online shopping that I can do so again this year as well.
Posted by Andrea L. Cole at 8:47 PM