The continuing saga of the so-called penis table

I have what some may call irrational and so may call perfectly rational hatred for MDF (also known as chip board) furniture.  I have a shit ton of it in my house, but I absolutely loathe it.
Thing is, it's inexpensive and light and usually comes ready to assemble.  Ergo, I have a ton of this crap in my house.  Book shelves, dressers, desks etc.
But I dream of wood.  Real wood furniture.  I dream of eventually replacing every piece of cheap, shitty, Walmart/Canadian Tire etc prefab crap with oak, or maple or pine.
A few years ago some friends of mine were moving out-of-country an as such, had divested themselves of most of their furniture.  By the time they their going away party, they were down to a coffee table set and a couch, both of which were slated for the dumpster the next day.
It was a few hours into the night that I realized that here was a rather nice wood coffee table set, that was just going to be thrown in the garbage without my intervention.  I asked my friends if the would mind if I took it instead and they quite were agreeable to this arrangement.
There was one small catch.
Prior to my "hey, this is some pretty decent shit" revelation, our host had presented the partygoers with a few Sharpies with which to sign their well wishes on the last of the furniture before it made its way to the dumpster.
Do you know happens when you combine an apartment full of revellers and a batch of Sharpie markers?
Penises.
Penises on your new coffee table set.
So many penises.  And boobs.  And penises with boobs.  Some sort of multi-headed penis hydra.  And a penis palm-tree.
There was even a Cock Ness Monster.  I kid you not.
Nonetheless I was determined.  With help, I dismantled and fit the set into my car, then took it home and hid it in the shed away from my children's impressionable view until I could find some time to strip and refinish it.
Three years later, I'm finally getting around to this project of mine, mainly because I dislike my current coffee table and I got tired of hemming and hawing about whether or not I was actually going to get around to refinishing the damned thing.
It's slow going.  I started off using a paint/varnish thinner but after multiple chemicals burns and some kind of reaction to my nitrile gloves that caused my hands to heat up and stiffen in an alarming manner, I decided that paint stripper was fucking bullshit and sought out a heat gun, which I was able to borrow from a friend and former co worker.
What a difference.  I've only burned myself bad enough to leave a mark once (although I've probably singed off some leg and arm hair with flying paint chips), and the gun goes through the paint and varnish much faster than the paint stripper did.
I am hoping to at least have the whole set stripped, if not sanded, by the end of the summer.  But that is what I have been up to. 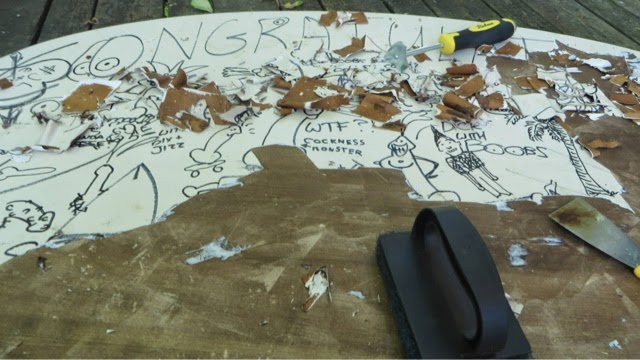 Email ThisBlogThis!Share to TwitterShare to FacebookShare to Pinterest
Labels: hobbies, life in general, my friends are nuts, NSFW