The Internet is Effing INSANE.

So, first of all, if you're not reading The Bloggess, you are missing out on some top-notch funny.  Seriously, you three, you need to get on it.

But not only is she funny, she's apparently crazy-powerful as well.

This week, a gentleman *koff* by the name of Jose of Brandlink Communications found this out the hard way.

Here's the full backstory, but I'll sum it up real quick-like for ya:

- The divine Ms. Lawson receives poorly-researched PR pitch for something having to do with Kim Kardashian and pantyhose.
- Jenny responds how she usually does to unsolicited PR pitches... with a short letter and a picture of Wil Wheaton Collating Paper
- Jenny receives short, snippy but on-the-whole still fairly professional email response from Erica at Brandlink Communications.
- VP Jose replies by calling Jenny "a fucking bitch" but has mistakenly hit Reply All.

- Jenny calls Jose on his remark, explaining this her usual response to unsolicited pitches, and most people either find it funny, or at the very least, take the hint.

- Jose basically tells Jenny she should be flattered that said PR firm should even find her relevant enough to send pitches to.
Let me just add here, that @thebloggess currently has 170K+ Twitter followers to @brandlinkcomm's 900-someodd.  The woman created a Facebook page for a giant metal chicken that has over 26K likes.  This is not what I would call irrelevant.  Irreverent, maybe, but definitely not irrelevant.
Again: 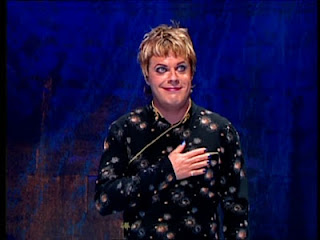 - With a single tweet and a blog post, said Bloggess unleashes an unholy, sulphur-raining maelstrom of internet smackdown on Brandlink Communications.

I'm convinced that "Please Stand By For Demonstration of Relevance" is officially the most bad-assed line since "Yippie Kay-ay, Motherfuckers."

I can't read that line without imagining Jenny standing on top of a mountain, arms raised, with lightning flashing and thunder crashing while angry hordes of bloggers and tweeters come swarming from over the surrounding hills, right up into BrandLink's "grill" - so to speak.

I don't think I have to remind Ms. Lawson of Uncle Ben's old adage of great power and great responsibility.  Jenny has also used her blog as a platform to help others by promoting philanthropic causes and in one case, simply publishing one Christchurch, NZ woman's utterly hilarious plea for help.

Wow, those are five words that don't seem like they should go together.

Anyway, if my blogging efforts resulted in me becoming even 1/457 as 'relevant' as this one, I'd consider myself one very excited blogger.
Posted by Andrea L. Cole at 5:30 PM

Email ThisBlogThis!Share to TwitterShare to FacebookShare to Pinterest
Labels: All Kinds of Effed Up, blogging, herd mentality, Holy shit guys did you see that?, marketing, the intertubes, the one where I suck up to people more popular than me