Thoughts on this years Juno Awards, keeping in mind that I didn't actually watch them, not having cable.

... But I've enjoyed reading the tweets and looking at the pictures.  And even though I generally hate award shows, I wish I had watched.  In reviewing various photos and blogs and articles, I have a few thoughts.

What the fuck is with Win Butler's hair?  And why doesn't he have eyebrows? 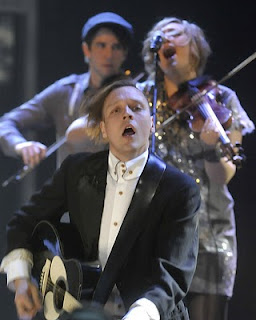 Emily Haines consistently manages to look dead on the inside.  Even when smiling.  She has that coked-out life-beaten dead-eyed prostitute look about her.  It's sad and disturbing, because I really really like her as a musician, but when I see the pictures I just want to hug her and go "Be happy, Emily Haines.  It's not so bad as all that."  The only picture I saw where she looked truly happy (nay, blissful) was the one that was posted on Metric's twitter feed.  She's hugging Buffy Ste. Marie.  And smelling her, it looks like. 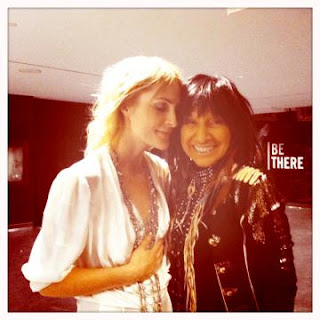 I heard so much on Twitter last night about how great Jim Cuddy looked that I was actually kind of disappointed today when I saw pictures.  I mean, he looked good, dapper, as he generally does, but I don't know, I was kind of expecting radiance, I guess.  I thought he was going to be sparkling or something. It's like that Simpsons episode where Homer sees the sign for the world's biggest cookie, then he buys it and is like "Oh.. well I guess it's pretty big."  but you can tell it didn't live up to his expectations.

It's okay though, I still love you, Jim Cuddy.
Neil Young gets scarier looking with every passing year.

The Canadian music industry is a sea of Buddy Holly Glasses.

This is common in most music award shows, but I hate when performers/presenters/nominees/whathaveyou can't be bothered to dress up a bit.  It's a fucking award show?  If I was at one of these things, I'd be like Cinderfrigginrella in my princesseyness.

I mean, Shania Twain is one of my least favorite people in the world, but at least she knows how to dress for an awards show.

Meanwhile, on the other end of the spectrum, Classified looks like he's on his way to an inner-city basketball court,
and Hollerado couldn't be bothered to brush their hair
And hey, to that guy from Barenaked Ladies whose name I can't remember, but I know you replaced one of the Creggan brothers.. well, this MIGHT just be the kind of occasion that warrants remembering to shave, mmkay?
There were many who managed to clean up rather nicely, both young and old (Ben Kowalewisz, I'm looking at you, baby.  That's right)

I guess this post is mostly about my irritation with music award shows and their distinct lack of glitz.  I know, I know, it's a 'too cool for school' mentality which is prevalent in the music industry (especially amongst rock genres.. frankly, a lot of the hip-hop artists in attendance looked pretty smashing.  Kardinal Offishal's orange suit was a thing of beauty).

Maybe as someone who doesn't get a chance to dress up very often, I wonder why more people don't take the opportunity.

Oh?  The actual awards?  Meh.  Arcade Fire won, the Biebs won.  No real surprises.  Matthew Good was confused as to why his album Vancouver

won Best Rock Album when it was released in 2009. I'm sad I missed the Canadian artists tribute.. I'm sure it'll show up on YouTube.