The inmates are running the asylum down in the big city of Toronto as we speak, as people gathered to protest the G20 summit.

First off, let me say I agree that the G20 is a big fuckoff waste of time and money and resources that could be put to far far better use. Look at all the money and prep time that went into the G8 'pre-game' up in Huntsville, for a meeting that took less time than the average Tay Township council meeting (according to my dad, anyway).

So, let me make it clear, I don't have a THING against protesting this thing. No way. Free speech, says I.

Rioting, destruction and general fucking-up-of-shit is a whole other story. Toronto Mayor David Miller (a guy I've otherwise been pretty much unimpressed with) has it bang on when he said that this kind of idiocy (my words, not his) by so-called protesters puts the real protesters in a bad spot by giving those who practice civil disobedience a bad name.

Oh wait, my mistake. there's nothing remotely civil about smashing windows, lighting police cars on fire and general rioting. And guess what? Your messages? LOST. All those causes these folks are fighting for? IRRELEVANT.

People aren't going to remember what you were fighting for.. (what are you fighting for, again?). They're going to remember how you all fucked up a bunch of businesses that are filled with people trying to eke out a living, and how their insurance rates go up.. and the blame won't go where it rightfully goes, to the people who organized this ridiculous 'summit' - it'll go squarely on your shoulders.

What does this accomplish? Next time, people arent' going to listen to you. And when your message is overshadowed by your actions, you FAIL.

So what has been accomplished by all the destruction and mayhem? What will happen because of this? Do you think it will stop another G8/G20? No. Did 20,000 strong in Seattle do eff-all to stop more waste? No. Because all it does is give the politicians reason to waste MORE money and MORE resources and MORE time to protect themselves from the evil, bad, evil, evil scary protesters next time they wanna have their little do.

To the people with full intentions of a peaceful protest, you have my pity for having to deal with these jackasses giving you all a bad name.

A friend just suggested that people are sick of Harper and want to see him embarassed on an international playing field. Well, I don't know about him, but I've never been more embarassed to be a Canadian. And from me, that's saying A LOT. 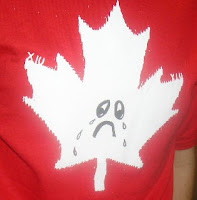