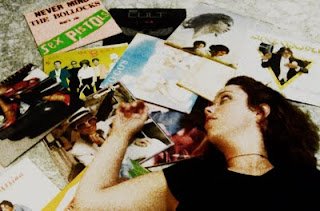 Thanks to my good friend Lori, I was recently able to procure a working hi-fi - one of those fancy vintage cabinet types, you know, the ones that will not only play 331/2 and 45rpm but 78 and *gasp*deargod* even 16rpm albums. The kind with a changer you use to play a number of albums at a time without having to get up off yer lazy arse. Or a least, once upon a time you could. For a while it was on the blink, and in my attempts to fix the problem, I kind of fubar'd the auto-play function. Totally fixable, but requires the assistance of someone with nimbler fingers and far more patience than I myself happen to possess.

The small collection of records I've held in storage for the last ten or so years consisted mainly of three subsets of records:
The difference in sound between digitally recorded music and this analog format is one I never appreciated when I was younger and my parents were constantly playing records. They just sounded scratchy and skipped a lot. I find now (and whether this is the format or the player itself) that the sound is fuller, deeper.

Today, I happily discovered that my local pawn shop also carries a small collection of LP's, at the not unreasonable price of $2 a piece. For this evening's listening I've picked myself up the following:

Was on a bit of a new wave kick, yes. I enjoyed discussing the fun of having eclectic musical tastes with the new counterguy at Uncle Bucks, and was quite excited to get home and throw one of these babies on. I've covered side A of the B-52's and I'm digging it. It's pretty weird and out there, but makes pretty cool 'getting dinner ready' music, as it carries a decent beat for dancing around the kitchen.

Off I am now to sample some more of these delectable audible goodies, for the place is an unholy disaster and there is much to be done.
Posted by Andrea L. Cole at 6:22 PM

Email ThisBlogThis!Share to TwitterShare to FacebookShare to Pinterest
Labels: music