There's about 1000 Penn State Students that need a good hearty Throat-punch and a number of staff that need way worse than that...


I've never cared much for football.  The only things I care less about than college football are NFL Football and to an even lesser extent, CFL football.

I care a shit-load about kids though.  Which is evidently more than I can say about the jackholes at Penn State that were rioting in protest over the sacking of long-time coach Joe Paterno after he was fired for helping cover up for a former player after the player was caught raping a small child in the locker room.  TWICE.  Over ten years ago.

Let's let that sink in for a moment, shall we?

Mike McQuery, assistant coach, walked into a locker room sometime in 2002 and found Jerry Sandusky sodomizing what looked like a 10-year-old boy.

McQuery, in all his wisdom, turned around and walked out.  Now, call me crazy, but I think the proper response in this situation may have been a physical intervention in the 'GETOFFTHATLITTLEBOYYOUTWISTEDFUCK' vein.  That's just me.  Seems a little more pro-active than 'Oh.. hrm.  I need to go think, but as you were, gentlemen.'

Instead he walked into Paterno's office, told him and was effectively told "No, we're not going to call the cops.  We'll let the administration take care of it."  Then both he and McQuery washed their hands of the situation while the administration handled it to the effect of telling Sandusky "Hey, Jerry.. if you're going to rape little boys, can you please not do it on campus.  Mmmkay, thanks."

It gets even better when you consider that this was NOT the first report of Sandusky's misdeeds.  In 1998 a janitor stumbled across Sandusky performing oral sex on another small boy in the locker room.  And again, walked out.

What the fucking fuck?

Now it seems that Sandusky took his dirty work somewhere off Penn State campus and got caught.  Someone decided NOT to sit on their hands and in the wake, the dirty details of the other children he victimized have come to light and Penn State University is in a world of shit, because they've been covering up for Sandusky all these years.  Because football, you know.  Way more important than preventing child-rape.  Clearly.

So the President stepped down, and Paterno has been fired, as he should be.  Penn State students are rioting.

Are they rioting because it took so goddamned long to bring these allegations to light, and fire some of the people responsible for covering up?  No, it's because their precious coach got fired and who's going to coach the big game now?  Each one of the kids crying over Paterno and the good name of Penn State being ruined should be punched in the throat.

A commenter on Feministe's article tried to paint Paterno as sympathetic and torn between conflicting ethical dilemmas.  Protect the school's good name or potentially put a child-rapist behind bars.


"We all have to balance competing ethical obligations all the time, let’s at least do each other the courtesy of admitting that it’s difficult.  I’m not saying what Paterno did was right, I’m saying it was understandable."

There is no way that not calling the police after witnessing a child rape, or not INSISTING on calling the police after someone else witnesses a child rape, does not make you the worst person in the whole fucking world (outside of the rapist themselves).  There is no 'competing ethical obligation' here.  The only ethical obligation was to those kids who were victimized by Sandusky.  Not to the University, not to the team and definitely not to Sandusky.

Every time you whine about the 'witch hunt' you are figuratively slapping a nameless little boy in the face and saying "We don't care about you.  You mean nothing.  We only care about the game."

Edit:  For future reference, other universities or organizations may want to use this handy, simple flowchart for reference, care of Adulting: 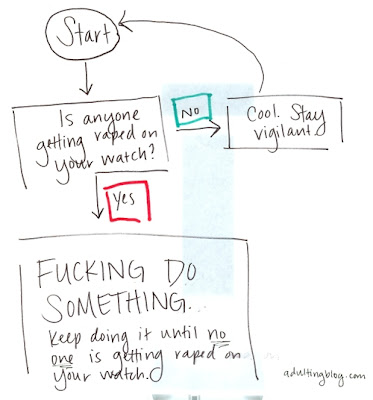