An Open Letter to the Idiot who cut me off as I tried to merge onto Hwy 12 this morning...

You don't know me, but this morning as i was coming up the ramp to get onto Highway 12, you and your giant hideous red pick-up truck came up out of nowhere behind me and effectively cut me off as I was trying to merge. I had barely time to put my blinker on before you came careening out of nowhere. Had I seen you a second later, me, my car, and my children would probably have been, to use insurance terms, a 'write-off'.

I wonder if the guy in the white car that was coming up behind us (oh, yeah, the one I SAW, but apparently YOU didn't) was shitting his pants as you zoomed into his lane as though your pregnant wife was crowning in the passenger seat. I know I was. You may have heard the honking meant to express my dismay.

I'm not sure if maybe the giant truck and overly aggressive driving style is your way of maybe over-compensating for erectile dysfunction issues or some latent homosexual tendencies that you're just not ready to come to grips with, but I suspect this may be the case. The big exhaust pipes coming up the back? Pretty Phallic, if you ask me.

Anyway, my advice is this: Find a guy, find some little blue pills, and do some experimenting. Hell, it's the 21st century, we're not here to judge. Stop putting people's lives in danger. In with the love, out with the jive. Next time, when you're out pretending you're Jacques freakin' Villenueve at a monster truck rally, remember that you live in a very small town, with a VERY recognizable vehicle. Keep that in mind.

P.S. To the other idiot who almost killed me this morning; You do NOT have an advanced green, so you must wait to make your left turn. I go straight, thus I go first. Asshat. 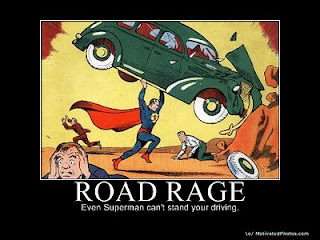