When Life Makes Decisions for You

After the demise of our respective marriages, my sister and I shared a house for about two years.  For the first year, she went to school while I took care of our four children while I was on maternity leave.  I was not well suited to daycare, so when my one-year leave was up, my good friend Crystal, who has much more patience for children than I, joined our household as a live-in nanny as it was a hell of a lot easier than shipping four kids of varying ages out to daycare.

After the ex-hub and I split, I immediately got my name on a waiting list for subsidized housing, knowing that it would be difficult at best to raise two children on a convenience store clerk, and later student budget.  We lived in the house for a little under two years, until fate unexpectedly set in.
It was an unusually warm day in April.  I had finished writing my first year Psychology exam that morning and had rushed home to look at an apartment, as my name had finally come to the top of the housing list.  Here, you are allowed to turn down three available units before they drop you back to the bottom of the waiting list.  I had already turned down a place six months previous on account of our obligation to the unspoken 'lease' we had with my parents.

The apartment was lovely... three bedrooms, two bathrooms, well kept building.  But I was unsure about moving to Midland, when I would be going to school in Barrie.  Would it be better, perhaps, to hold out and see if a place became available in Barrie?  The building manager told me I could think it over, as there was one other person looking at the place, but they too were unsure for whatever reasons.

That evening, we sat out on the front porch, debating what to do for dinner that night.  It was a warm, lazy Friday and no one much felt like cooking anything elaborate, but pizza seemed well.. blah.  The suggestion of chicken wings was brought up.  Inwardly I groaned, but being self-aware of my picky eating habits and how they might be unfair to others, I just kind of shrugged and went 'meh, whatever'.

I was downstairs with the smaller children when I heard the sound.  Nicky was on the front porch studying, and Crystal and Steve (my sisters boyfriend at the time) were in the kitchen, along with my oldest nephew.  My Reagan, about 18 months old at the time, had wandered up the stairs. In a house with four adults and three older children, I figured she couldn't get into too much trouble.

It sounded like a splash - a horrific, sickening splash - and my first thought was that my beautiful toddler had pulled the pot of hot oil down on herself.  I paused in sheer terror, waiting for the screaming... there was a scream, but it came from my oldest nephew as he ran out the front door.  I believed the worst.  I heard nothing from Reagan and  it then to me that not only was she horribly burned and disfigured, but that she was dead.  I broke from my paralysis and came up the stairs to the front landing, and heaved a sigh of relief upon seeing her standing at the front door, babbling to herself, completely unharmed.

However, out of the corner of my eye, up the second short flight of stairs, I saw the flames.

I grabbed Reegs and quite literally picked her up and tossed her onto the front lawn, before running back down to the basement to herd the other children out the back door.  I ordered them to go around to the front of the house and wait there.  I ran back into the house and into the kitchen where Crystal stood in front of a giant flaming stock pot of doom, flames licking the ducts over the stove.  She was already on the phone with the fire department.  Steve had grabbed the birdcage and met Nicky outside with the children.

Panicked, I grabbed a box of baking soda, because they say to put baking soda on grease fires to put them out.  This, however, was less a simple grease fire and more an raging inferno at this point.   Like a lunatic, I threw handfuls of baking soda at the flames that were now licking the ceiling.  The soda sizzled as it hit the flames.  Crystal stayed on the line with the fire department as long as possible, but gave up when the portable phone's cradle caught fire.   As cupboard doors began to blacken and ceiling tiles began to curl and drop to the floor, there was nothing left to do.

From the street we watched the smoke billow from the windows.  I could hear glass popping as the immense heat shattered mugs, drinking glasses, and windows. The roughly three and a half minutes it took the volunteer department to arrive stretched out like an eternity.  We stood in the road and stared.  And cried.  We called our parents and told them of the fire and we cried some more.

Later, scrounging through the wreckage, I found a lone pink circle amidst the otherwise soot-black carpet where our cat had curled up in the smoke when she couldn't find her way out.  And I cried some more.

Needless to say, I took the apartment.  And I still don't like chicken wings. 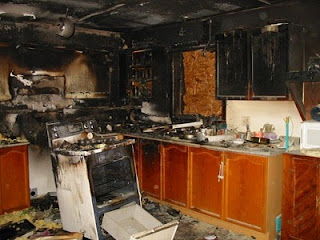 This post was written for Studio30Plus weekly writing challenge.  The prompt is "Irony".
Posted by Andrea L. Cole at 2:19 PM

Email ThisBlogThis!Share to TwitterShare to FacebookShare to Pinterest
Labels: Bad things DO happen to good people, family, friends, I leave the food prep to the professionals, kids, life in general, memories, pets, studio30plus, this shit only happens to me, writing