Canada has fake bands too, you know.

I'm kind of getting a kick out of HelloGiggles.com as a fun site for randomness and pop culture. (my massive girly-crush on Zooey Deschanel notwithstanding) However, I'm finding it unforgiveable that twice now they have posted articles on the best fake bands from movies and made glaring omissions.  Maybe it's a deep-seated prejudice against Canadian Content, or maybe they are just sadly ignorant of our offerings north of the border (god knows...  Canadians hardly recognize that we have a film AND a television industry, so I can't be too hard on the Americans).

The other possibility is that with the exception of my last choice, the bands I mention can only be considered 'good' if 'good' to you doesn't necessarily mean 'talented, with catchy tunes' but rather 'kind of goofy but nonetheless amusing as fuck.'

Here are some examples that have twice now been left off the list, and have thus prevented me from giving HelloGiggles full recognition as a credible pop culture website.

Sometimes I just like to piggyback on other people's ideas.

Thunderface - Corner Gas
Consisting of Hank on Vocals, Brent on guitar, Wanda on bass and Karen on drums, Thunderface decided to reunite for a show at the hotel after a 15 year hiatus, much to Paul's delight.  After kicking the Tragically Hip out of Brent's garage to practice, their one show is cut short by the fuzz, otherwise known as Davis (who is jealous that Karen got picked as drummer over him). 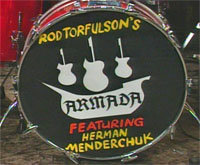 Originally known as simply Armada, they're goal was to practice, always showing up on time and arrive having eaten.  The nameless singer played by Kevin McDonald basically did all the work, but was consistently over-ridden by bandmates Rod and Herman, whether it be to add backup singers, or even keep Kevin in the band (while keeping his songs).

Joey Jeremiah, Derek "Wheels" Wheeler and Archie "Snake" Simpson only ever managed to write one song over their 3-4 year career and man, was it terrible but catchy in a way that after 12 hours of having it stuck in your head, you would begin to believe that the 'Something' that 'everybody wants' was probably something sharp to jab in your eardrum to distract you from this godawful song.  Still, you had to admire their persistence.  Maybe, I don't know.

You've been warned, though.

Hard Core Logo - Hard Core Logo
All joking aside, this is really where I think the HelloGiggles article dropped the ball.  Hell, Barbie and the Rockers made it onto their list, but they somehow managed to miss possible the most bad-assed of fake bands.  I'm not saying this just because of my deep-seated desire to be the meat in a Hugh-Dillon-Callum-Keith-Rennie-Circa-1996 Sammich.

I can watch this movie over and over.  I will admit, I have judged people on their enjoyment of Hard Core Logo.  Who could watch the dysfunctional vaguely homoerotic relationship between Joe Dick and Billy Talent, the good-natured antics of Pipe Fitter and John Oxenbergers decent into madness and NOT want to join a punk band?

Don't take this the wrong way, but to quote Mr. Joe Dick himself "You don't know shit from good chocolate, baby."

Email ThisBlogThis!Share to TwitterShare to FacebookShare to Pinterest
Labels: I am Canadian, I make my own fun, movies, music, pimping, pop culture, television