T'was the night before Christmas and all through the house,
the demon cats were chasing some invisible mouse

The children were playing though they should be in bed,
Believing that their giggling was over my head

With Chevy Chase on the TV and a nice glass of wine
I just had to wrap one more present, or nine.

"Santa won't come if you're still out of bed!
So on with your jammies or I'll be knockin' heads!"

Jumping and running like their butts are on fire
They dive under the covers, they know it's now dire

'fore sleep takes over I have to wrap these things quick
Life's not always easy when you're playin' 'St. Nick'

Their stocking are hung in their bedroom with care
Now how do I sneak all the goodies in there?

Stumbling on Barbies I curse quietly, but a lot
I hope these kids know what a good mother they've got.

Stockings all filled and presents are wrapped,
I really could go for a twelve-hour nap,

Though worth it to see their little faces alight,
Wake me when it's Christmas, I'm calling it a night.

I left out the part about how gross milk is that's been out for two hours, while you wait for them to get to sleep.  Cookies were pretty good though.

As was this three page missive complete with margin notes they left for Santa. 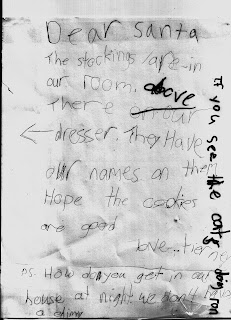 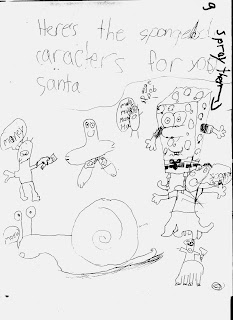 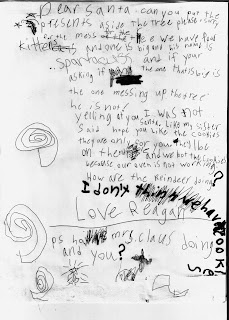 The stockings are in our room on our above our dresser.  They Have our names on them.  Hope the cookies are good.  Love Tierney.

P.S. How do you get in our house at night.  We don't have a chimny.

Here's some spongebob characters for you.

Reagan's Note: If you see the cats doin rong, Spray them -->

Dear Santa can you put the presents aside the tree please. Sorry for the mess for the tree we have four kittens cats and one big one and his name is Spartacuss and if your asking if the one that is big is the one messing up the tree he is not!   I was not yelling at you santa.  Like my sister said hope you like the cookies they are only for you.  The'll be on the end table and we bot the cookies because our oven is not working.  How are the reindeer doing? Reagans Note: I don't think we have cookies.

P.s. how is mrs. claus doing and you?

Yeah, Me, being awesome, forgot to buy cookies so we had to borrow cookies from Grammy to leave for Santa.  Gotta love the grocery store/LCBO/office supply outlet of Mom and Dad.

One quick Christmas rant about Christmas and Holiday songs.

.  You don't sound old enough to know what a drunk tank is, let alone spend Christmas Eve in one.  But generally, it works, even if it's kitchy as all hell, like when Axl sings White Christmas.

Contemporary Artists composing Original christmas tunes- Mostly Good, although there is the potential for disaster.

I've had fun listening to people bitch about the myriad covers of Wham's Last Christmas, although I maintain that the Jimmy Eat World version is bearable, if not enjoyable.  If you've never heard Better Than Ezra's Merry Christmas Eve, listen and if you do not even mist up a bit, then you are a robot.  I myself enjoy the songs that poke fun at the traditions of the season like Blink 182's I Won't Be Home For Christmas or The Vandals' Grandpa's Last Christmas.

Why the hell do they do this??  It's no wonder they mocked the practice terribly in Love Actually.  If there is anything that makes me want to collectively burn an artist's complete music catalog, it's hearing them cash in on a previous hit by Christmasing it up.

I'm going to brag for a minute, bear with me.

But holy hell, I am a lucky mom.  I spent the day marvelling at my girls and how well-behaved and polite they were all day.  I think I (and yes, I suppose *exaggerated sigh* the ex-hub and new-wife have to take some credit here too) must be doing something right, because when present time came - at 6 AM *grumble* - they made sure to take turns opening gifts, remembered their hugs and thank yous when opening the ones I gave them, and even wanted to make sure I had something to open.  I had cleverly marked one of the gifts to all three of us (The Tick Season 1

They also didn't destroy the house with their gifts while I went back to bed for an hour.  I had been up until 1 am two nights in a row doing last minute wrapping, and of all things, refinishing a jewellery box. Yeah.  See, the girls had both asked me for one, and I had planned to buy them both one from Lori at A Vintage Witch, but ran into a snag when the second box was nowhere to be found.  So rather than give up on the jewellery box idea, I got it into my head that I could take one of the girls old broken ones and fix it up.  In two days. Because I'm a masochist like that.

Here's the thing... not having a lot of money and and spending a lot of time saying 'no' or 'not likely' to the girls various Christmas requests ("Oh, you want a iPod Touch?  Good luck with that...") and then they ask me for something that's actually well within my grasp, then sure as hell I'm gonna try to come through.  The one I did wasn't nearly as nice as Lori's but I think it turned out well anyway.
Anyway, I digress.

Later when we went to my parents and there were more presents to open, they waited patiently for my sister and her kids to show up so we could open the rest, without complaining.  That's not normal.  My Grandma asked me how I did it and I told her "Regular Beatings, and Drugs.  Lots of Behaviour Modifying Drugs."

Hell, I didn't have a better answer.

I'll also add here that I'm lucky to come from a fairly functional family.   Little to no fighting, everybody gets along, everyone is gracious when it comes to gift time.  I'm really glad that holiday time doesn't come with a lot of undue stress that tends to be part and parcel of when you dread gathering your family in any way.

I wish everyone could be so lucky.  Hope anyone reading this had a good Christmas, and barring that, an enjoyable secular day off.
Posted by Andrea L. Cole at 10:46 AM