I really am a girl sometimes.

Generally I pride myself on being fearless as far as all the normal things that scare people go.  Creepy crawlies? Meh.  I squash my own spiders, thanks.

Horror movies?  I laugh in the face of Jason, Freddy Krueger and whatever other crazed ax murderer or thing that goes bump in the night you can put on celluloid.

NOT WHEN THEY HAVE FRICKIN' WINGS!!

Shortly after getting home tonight, the eldest child had let the big Tom outside.  She's not well known for being aware of her surroundings, which is how, we figure, it occured that a few minutes later she goes 'Oh!  there's a bird in the house!'

There's a bloody bat in my house.  FFFFUUUUUUUUUU!!!!! 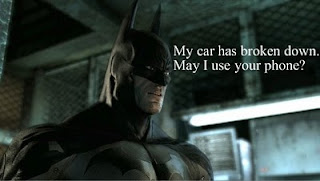 The ladies don't quite know what to do, so I immediately usher them into their bedroom before they have a chance to panic.  I fling open the front door and try to telepathically direct this bat to the door.

Outside, it's where you want to be, bat.

Mind you, vocally translates as "EEEEEEEEEEEEE!!!! SHIT!! AHHHHHHHHHH"  as the little bugger flies drunken-like back and forth between the kitchen and the living room.

I realize the door is wide open and one of the kittens has made it's way to the front porch, so I make a dive a throw the cat into the bedroom with the children, and proceed to bat-duck and gather the other cats (other than the giant Tom, don't really care if he gets out).

So I'm in my living room, screaming and throwing kittens into a room, while this poor confused bugger flies back and forth with increasing panic, all the while trying to reassure the children between eardrum-piercing screams as they muffle giggles (Yes, GIGGLES.. frickin' sadistic little...)behind their bedroom door.

The little one, the more helpful of the two, suggests the butterfly net.  "Quick Where Is It??" I ask, frantic, as I try to keep an eye on the flying rodent.  In the mudroom, she tells me.  That's fantastic I think, considering I'm at the front door, on the opposite side of the house, and getting to the mud room requires me to cross directly into my little friend's flight path.

I scream some more.  "It's okaY!  i'm Fine!! AUUGHGHGHHGHGH  MOTHER OF GOD" *flapping of bat wings*

Some how I get a hold of the butterfly net, but keep in mind, I've never wielded a butterfly net against a living being before.  I'm surprised there was very little breakage.  So, I manage to get the bat into my net.  Unfortunately I got him in there when I grazed him with the rim of the net, knocking him to the ground senseless (my aim isn't great).

It's important to note that this whole time I am still screaming and yelling obscenities peppered with half-assed attempts to reassure the kids, who obviously needed no assurance as they continued to LAUGH at their poor mother, from the safety of their bedroom.  grr.

So having knocked the bat to the ground, I throw the net over it and scoop it up, rushing to the front door to free him.  The little bugger won't let go of the damn net!!  So I shake the ever loving hell out of that net until I see something haphazardly flutter off into the night.

Email ThisBlogThis!Share to TwitterShare to FacebookShare to Pinterest
Labels: kids, life in general, pets, The awkward, this shit only happens to me