The children have been sick with something (h1n1? Generic influenza?) since Saturday. Well, the oldest has been sick since Saturday, the youngest since Sunday afternoon, off and on. The oldest is getting better now, and with better comes BORED, as she, like myself, has been cooped up in the house for the last three days.

The little one fights it, whereas the oldest was totally complacent in her illness. She goes through periods of sleeping, and crying and fever and nausea, and as soon as it subsides a little, she's up and insisting she's fine, and I have to make her lie down and rest. The oldest was content to sleep and watch movie after movie and not move if it could be avoided. For this reason, I think the little one may have a longer recovery time, if only because of her refusal to accept that she's actually sick.

I'm looking forward to getting out of the house tomorrow again.

Another Halloween has come and gone. I narrowly escaped being sick for the Hallows weekend with a heavy offence of Vitamin C, warm fluids and Cold FX. When the oldest fell ill I resigned myself to staying in and shelling out while the ex-hub took the little one Trick or Treating. We had a distinct lack of revellers on our street - maybe 20 in all. I attribute this to my street's distinct 'dark-and-gloomy' atmosphere. It's an older area, and not well lit, so it has a tendency to be fairly creepy. One would think this would be a GOOD thing this time of year, but I guess not.

Preparing for Christmas this year.. I'm feeling the pressure. I picked my sister's name in our draw this year and her reaction was 'OHHHH! I'm gonna get something AWESOME!' Not to make her out to be a materialist, she's just speaking from experience. Two years ago, a search for a discontinued Starbucks coffee mug (a mug that held a great deal of sentimental value, eventually located in Thailand through an eBay auction) resulted in possibly the best gift-reaction face ever. 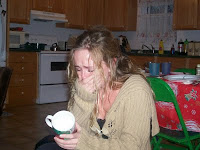 At any rate, that's gonna be a hard act to follow. One of my main irritations with the holiday season is the emphasis on material goods. Someone once said, "It's about giving.. not recieving". Bull. Unless you're referring to being charitable and helping others, that statement just kind of emphasizes the feeling of obligation. I prefer to place an emphasis on time spent with friends and family, but every year despite my best intentions I get sucked in. I don't mean to be a drag, but I shudder when I enter stores the day after halloween and the Christmas marketing machine is already in full swing. It's enough to make me want to be a hermit. Don't get me wrong though.. I love gifting people, when it's something I've had time to put thought into. I'm looking forward to coming up with some inspired (but budget-friendly) gifts for my loved ones this year.
Posted by Andrea L. Cole at 12:18 PM