In the span of 12 hours I vanquished a fear and had it realized again.

I don't go around saying it very often, but I'm pretty smart.  With the standardized tests to prove it.  So it's frustrating when there's something I really want to master but I JUST.  CAN'T.  FACKING. DO IT.

For a long time now, I've wanted to learn to sew.  I can do simple things like hemming pants or repair a split seam, but I really want to learn to design and create things.  Thing is, sewing by hand is slow and bullshit.

I have a sewing machine that was given to me by my mother, which was given to her in turn by her mother which was bought as a gift by my grandfather and has been used maybe 8 times in total.

My Nanny wasn't much of a seamstress and my mother always preferred to used the old Singer that was given to her by.. oh.. hrm.  Some female relation or another.  I think it was my great grandmothers.  Anyway, she likes to use that one (probably because unlike this one, it doesn't have a whole table attached to it).

Sewing machines elude me.  My mother was still making my halloween costumes when I was 24 because I would get this lofty idea that I would sew my own costume, I'd borrow her Singer, sit down in front of it and promptly forget the method for setting up the machine, despite Mom having shown me 47,000 times before.  Gord forbid I'd have to change a bobbin.  Forget it, not happening.  I'd get all flustered and it wouldn't be long before Mom was sewing my costume for me. 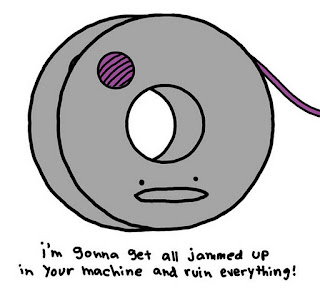 So when I got this one, I had every intention of learning to use it.  I took it out on one or two occasions and would do a few test runs.  My first attempt resulted in this: 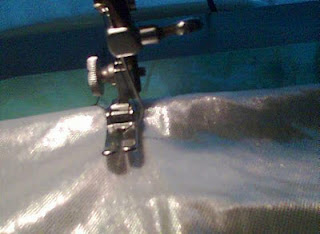 That was enough to scare me off for oh say... a good year and a half.  Meanwhile though, I kept hanging on to old T-shirts with dreams of making them into pillows and quilts and such.  Today I braved the machine again.  I threaded it, got the bobbin set up with the help of the 50 year old instruction booklet and much to my delight I managed to mend a couch cushion and two of the girls shirts.

I was on a roll.  I went into town that afternoon and excitedly told my friend Lori about how I had braved the sewing machine and that I was going to learn to make shit, starting slow with simple things like pillows.

I guess I got too big for my britches because tonight I cut up some fabric and pinned it and set to work.  I decided to try the zig-zag setting, but for some reason everything kept getting tangled, so I played with some settings and tried to adjust the tension.

I fucking broke it.

I have barely touched this thing over the last 2 years because of my intense fear that I would somehow break it and would end up with a very heavy side table.  I broke the goddamned tension dial.  As I was turning it, the dial popped off and springs went flying everywhere.

And I don't know how to put it back together.


I'm not dealing well.  I'm not good at feeling stupid and this epic failure on my part is way more upsetting than it should be.
*sigh*  Faaaaack.  Anyone have any expertise on how to fix a 50-year-old sewing machine?
Photo Credit:  www.nataliedee.com
Posted by Andrea L. Cole at 11:25 PM

Email ThisBlogThis!Share to TwitterShare to FacebookShare to Pinterest
Labels: gettin' all emo on ya, grievances, hobbies, I am not proud, techtarded, the stupid, this shit only happens to me