Today I said good-bye to the house that has been my family's home for the last 20-odd years.  Hearing that the place had sold was excellent news, it had become a crushing financial burden and my parents were itching to get moved into their little retirement home (formerly known as 'The Dollhouse' when I resided there).

Odd, the number of memories a house can store up in the course of two decades.  I've left and returned a number of times... strange to think that I will likely never see the inside of it again.

I didn't want to move here.  Not at first.  My parents had first made noises about leaving Aurora when I was in the fifth grade and I was devastated.  Less than a year later, when they made their purchase, I had changed my tune.  I was all "Fuck yeah, let's blow this yuppie hellhole."

That spring, at eleven years old, my parents drove me out to a vacant lot in the middle of a newish subdivision in a town of not much more than 1000 people and said this would be our new home (the house that was to be built.. not the vacant lot).

20 years is a lot of memories.  After work I drove out to the house, let myself in and walked the empty rooms, thinking of the times I'd had there.

Age 12: My sister gives me a hard time about the posters on my wall.  I'd harboured a huge crush on the kid from Terminator 2, but I'm starting to get over it.  I begrudgingly let her tear down the biggest of the Eddie Furlong posters.

Age 14: My parents are out and I have friends over.  Sitting around the kitchen, smoking and gossiping, we start burning bits of paper and birthday candle in a huge glass ashtray.  Just as Jenn goes to comment about our mini-campfire the ashtray explodes, spraying coloured glass and bits of flame.  I catch hell a day later when Mom notices the varnish is missing off one of the kitchen chairs.

Age 14:  Mom works in the city, so Dad and I are home by ourselves a lot.  Some nights, he goes to the Legion for a beer, leaving me to my own devices.  This particular night, I was out on the back deck, having a cigarette, when I see him heading down the hill towards home.  Hurriedly, I ditch my smoke... and proceed to run smack into the screen door.

Age 15:  Home sick one day in March, my sister gets a call from the hospital that her Cesarean has been re-scheduled... for THAT DAY.  We freak the fuck out, take her to the hospital and by end of day, my sister is a mother and I am an aunt.

Age 16:  The house is full of noise and people.  Nicky has moved home and my best friend lives with us also.  The basement is being finished, so we're all confined to the upper floor.   Melissa does a fantastic impression of the Carlton Dance. We get the baby, Randy, to make his 'Uggie Face' and everyone laughs.  We paint a huge mural on Melissa's wall, featuring all the pop culture references of our time.  Friends sign the wall when they visit.

Age 17:  After a few frustrated attempts, I lose my virginity, on the couch while my parents are out. My mother finds condom wrappers in my room a few weeks later.  During the days following, my dad has a hard time making eye contact with me.

Age 20:  The day before my wedding, it's 30 degrees and the future ex-hub and I are trying desperately to ice a cake that is melting fast than the Wicked Witch of the West in a monsoon.  The next day, my aunt picks up a slab cake from Foodland and the three-tiered cake my sister painstakingly baked is forgotten.  I'm informed that one of the groomsmen still doesn't have a suit.  My mother and I are both freaking out nervous and my grandmother is insisting that someone get us a drink, a joint.. anything... to calm the hell down.

Age 21:  The future ex-hub and I return, tails between our legs and expecting, leave behind most of our belongings and debt-ridden return to the house on George Street.   We live in the basement for the next year.  It is Mid-spring when I wake him up in the middle of the night to tell him I'm having contractions.

Age 23:  I return once again, with one less husband and one more child, to live with my sister and her boys.  The house is full of the noise and the fun and the stress of two (and later three) women and their four children.  The day I return from the hospital, Tierney drops her week-old sister on her head.  In tears, I rush to the hospital.  While I am gone, the CAS visits, scaring my sister out of her wits, as we are still just unpacking and there are kids and boxes everywhere.

Age 25:  Sitting in the yard with my sister and one of my best friends, discussing the future and dinner plans.  It's time to part ways, while the going is good.  Living with people is hard and we are all happy to still be speaking to one another.  Later that day we stand in the street, tears in our eyes as fire trucks arrive and neighbours leave their houses to gawk at the flames that are leaping from the windows.

Age 26:  Months later, fully restored, this is once again our parents home.

Birthdays, Christmases, laughter, fights, nights watching TV, parties... So much time passed, so much of a lifetime spent.  So many people come and gone through the front door, struggling to pass each other on the narrow landing.

If I had some liquor, I suppose I'd pour a little out about now.  So long, House. 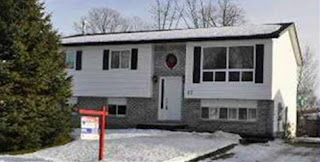 Email ThisBlogThis!Share to TwitterShare to FacebookShare to Pinterest
Labels: gettin' all emo on ya, memories, Moving, My Idyllic childhood