I'm pretty vocal about the fact that in general, I think valentine's day can suck it. Yeah, even when I'm not alone for the occasion I still tend to hate it out of loyalty to my single self. But in an attempt to not expose the kiddies to too much jaded cynicism, I do still let them participate In the yearly thing of handing out cheap little cards to their classmates, cards rendered utterly meaningless by the fact that they are obligated to include EVERY kid in their classes, Even those ones I'm sure my children would happily punch in the face.

The side effect of my general desire to pretend this day doesn't really exist results in me forgetting these things until the last bloody second. Which means I miss out on the possibility of having my kids branded as the coolest (okay, fine, weirdest) kids in their classes by handing out cards like this. Holy shit you guys:

As much as I am incredibly sick of hearing about Betty White (Yes, she's old and she's funny.  So are both my grandmothers.. so why aren't people making a big deal about them?) these are all kinds of awesome. 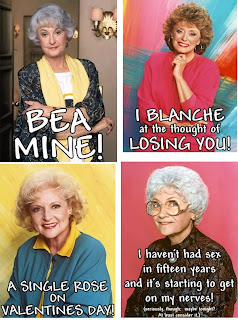 Next, from the 'My Nostalgic Inner Child is Geeking The Frick Out' files: Last, I always end up coming back to the incomparable Brandon Bird and his Law & Order SVU Valentines cards which according to his site are currently sold out.  Boo-urns. 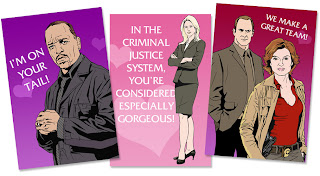 Meh, I guess they're happy enough with iCarly. Yes, Tess, I ended up getting them after all.
Posted by Andrea L. Cole at 8:01 PM

Email ThisBlogThis!Share to TwitterShare to FacebookShare to Pinterest
Labels: holidays, Holy shit guys did you see that?, I'm geeking out over here, I'm screwing up my children, kids, Sometimes I'm nice to people