Christopher Titus, I am disappoint.

Some of you may remember a short-lived but hilarious (if you share my own sick sense of humour) sit-com a few years back by the name of Titus, based on the real life upbringing of comedian Christopher Titus.

So I'm a fan of his page on Facebook and I came across this post.  When I first read it, I honestly thought it was satire but as I read on I realized that it was written in seriousness.  I think.  I'm not sure, actually, the whole thing is kind of muddled and incoherent.  I don't even know where to start with the whole 'Negro Greetings' thing... I'm pretty sure I'd find it offensive if I could figure out what the fuck his point is on that one.

Anyway, I'll let you read the post for yourself. 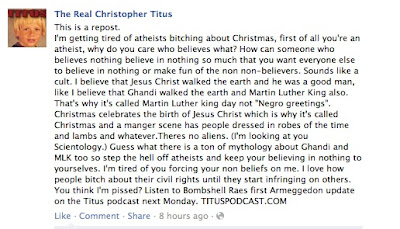 This is a repost.
I'm getting tired of atheists bitching about Christmas, first of all you're an atheist, why do you care who believes what? How can someone who believes nothing believe in nothing so much that you want everyone else to believe in nothing or make fun of the non non-believers. Sounds like a cult. I believe that Jesus Christ walked the earth and he was a good man, like I believe that Ghandi walked the earth and Martin Luther King also. That's why it's called Martin Luther king day not "Negro greetings". Christmas celebrates the birth of Jesus Christ which is why it's called Christmas and a manger scene has people dressed in robes of the time and lambs and whatever.Theres no aliens. (I'm looking at you Scientology.) Guess what there is a ton of mythology about Ghandi and MLK too so step the hell off atheists and keep your believing in nothing to yourselves. I'm tired of you forcing your non beliefs on me. I love how people bitch about their civil rights until they start infringing on others. You think I'm pissed? Listen to blah blah blah shameless self-promotions etc etc etc...

I read some of the comments but then stopped after I found that the stupid was beginning to burn, so I went on to post this response:


Those who have been reading this blog for a while know that I have very little patience for the "War on Christmas" crowd and that personally I find the idea that by simply acknowledging the varying beliefs of people living in North America we're contributing to the downfall of Western Civilization to be at worst, a xenophobic and dangerously bigoted idea and at best, just fucking ridiculous.  Saying Happy Holidays to someone instead of Merry Christmas isn't a big slap in the face to Jesus Christ.. in fact, from what I know of him, he would have encouraged it.  It's my understanding that J.C. was very into all that "Goodwill toward man" and "Loving thy Neighbour" stuff.

Take a look around you... the only people waging a war on Christmas and it's true meaning are the advertisers, the corporations and the grinding gears in the machine of greed.  If anyone forgets the 'true' meaning of Christmas, it won't be because a few people say Happy Holidays.

As for the original rant, I think Titus needs to do some research on Atheism and what it entails.  It's not a belief in nothing.  It's a movement toward rational thought and critical thinking instead of blind faith.  A lot of Atheists still celebrate Christmas, but may center it around celebrating family.  Hell, I consider myself an Atheist but I still think that it's possible that Jesus Christ existed, and I celebrate Christmas because I have respect for the ideas that Jesus espoused (that stuff that I mentioned above.  Love, and such).  No, I don't believe in the Resurrection.  I don't believe he was the Son of God.  But I respect his ideas.