"I swam in the ocean and once again had that lost-in-time feeling.  The ocean water was so calm that for a moment I could have been at home on Georgian Bay, perhaps on the beach at Wasaga.  I ventured into the water that was green under the tropical sun.  When I tasted the salt of the Atlantic, I knew where I was." - Vacation Journal 01-29-11 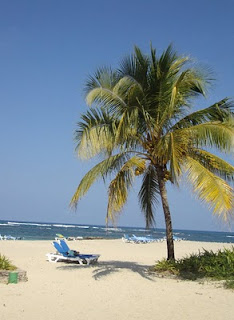 Saturday morning I woke up to the sunlight streaming into my room and promptly made myself a pot of coffee with the coffee maker provided.  No milk.  Dammit.  No matter, I thought as I wandered towards the breakfast buffet.  I have time to get a coffee and something to eat before the 10am orientation, I thought to myself not realizing that Dominican time is an hour ahead of Eastern Standard time, so rather than an hour, I had roughly two minutes.  No breakfast for me.  We were given a lot of information about various amenities of the resort, some warnings, ie. don't drink the tap water, don't convert your money to Pesos unless you plan to spend all of it, because the banks won't take those back, no way.

By the time orientation was over, I had missed breakfast.  No breakfast, no coffee.  I was not off to a good start.  I went to guest services to book one of our a la carte meals for the next night, as it was Kaylee's birthday. The guest services woman was an unholy bitch who instructed me to go to the front desk if I wanted to order a cake.  Front Desk told me I had to go to Guest Services who told me to go to the front desk.  No food, no coffee and I am dealing with the most unfriendly woman on the planet.  I lost my shit and was like "Seriously, can I not just get a frickin' cake for my friend?  For the love of God and all that is holy!."  We got it all sorted out but not without some tears of frustration on my end.

Starving, I bought some three dollar Pringles in the gift shop (yeah, I'm talking the single-serving can, not the full-stack) and headed to the pool with my book to kill some time and read.  This past summer marked the first time since I was roughly 16 that I have dared to don a bikini.  I was kind of nervous heading out (as I mentioned in my previous post, I was unable to find a decent one-piece) but all told, the trip did a lot of good in the name of my own personal body acceptance.  Were there a lot of people who looked a hell of a lot better than I did?  Yeah, I suppose so.  People whose stomachs haven't been ravaged by carrying two children.  At any rate, I was surprised at my own comfort level.  I didn't feel like people were staring at me going 'What is she thinking??'

Okay, I felt like ONE person did that, but she looked like kind of a bitch anyway.

There should be more bars that you can swim to.  For real.  The Swim-Up bar allowed me my first opportunity for meeting and talking to people.  It was there that I met Joe and Bruce from Long Island, who broke the ice with "Don't worry, I'm buying." Incredibly witty in the context of an all-inclusive, don't you think?  Nah, they were all right.  They played a guessing game at my age, and then commented on the vast number of Canadians in the Dominican.  I explained to them "It's frickin' cold.  We don't want to be there."

Here I also made the acquaintance of a number of the young gentlemen that had boarded the plane the previous day.  One of them called me out on my little piece of home, the Tim Hortons traveller I was using to carry my drinks in.  The plastic cups they pour your drinks in at the bar are little better than glorified shot glasses, so bringing a traveller means less waste and less trips to the bar.  And if you have a nice one, your drink stays cold.  I ran out of conversation quickly though, so after a quick water aerobics class I went and changed for dinner, hit the buffet and then killed some time until Kaylee and Mindy's bus from the airport was due to arrive.

About this time I started missing my guitar and really wished I had packed as my carry-on, since the thought of sitting on the beach and playing some tunes was sounding not only like a great way to relax, but I have always found it to be quite the icebreaker.  There was a beach party after dark and I got up the guts to volunteer for a competition for best reggaeton dancer.  It was fun and embarrassing.  I came in third and got a lot of compliments over the next day or two.

Finally Kaylee and Mindy got there.  Our rooms were messed up but we couldn't really do anything about it until the next day.  We were supposed to have adjoining, ocean-view rooms, theirs a double occupancy, mine a single.  I got a single occupancy, with the slightest view of the ocean and they got a room with a double bed.  On the opposite side of the hotel.  Anyway they got there, unpacked their bags and our game faces were ON!

We hit the hotel discotheque and met up with our buddies from the plane, who were a fun bunch of guys.  We heard of another dance club just outside of the hotel by the name of Coco Bongo so after the hotel disco closed we headed out that way.  I ended up sharing a drink on the patio with one of the Ontario boys until we decided to walk back to the hotel.  This confused the hell out of the girls, as this guy had a twin who showed up after.. so they're all "Um.. where's Andie?" and he's all "Who?"  Yeah.  Awkward but funny.

During the walk back to the hotel, J. and I got horrendously lost and ended up going full circle, right back to where we started.  It ended up being a long walk back to the hotel.  The second trip around afforded me the chance during a bathroom run to check out a pretty cool looking rock club I hadn't noticed before.  Sadly I never got to check out more than the bathroom at this particular establishment, and they never had any live music during the week.

I got woken up at roughly 5am by drunken silly giggles and banging at my door.

With one of the other ontario boys in tow, the girls decided to pay me a visit and wake my ass up.  I'm sure my neighboring guests LOVED that.  The whole scene was pretty funny though, once i got my friggin' pajamas on.
Posted by Andrea L. Cole at 10:20 PM