I'm working from home today as I think I may have contracted pinkeye from my friend's child, and none of my co-workers need to catch that shit.  That's the logical conclusion I've reached, anyway, since i woke up this morning and my left eye was beet red, with some goo, and itchy as all hell.  (I think, if there is a hell, there'd be plenty of itching involved, as it's definitely one of the more irritating sensations one can have).

I've come to the conclusion that I love the idea of working from home, but in my current profession, the reality doesn't match the fantasy.  I miss the double screen at work, and in my wee cubicle, there's no piles of laundry and dirty floors mocking me.  Those are someone else' problem.  And it's a snow day, so the ladies are here, and unnaturally loud.  Distracting.

I set myself up my first Etsy Treasury yesterday.  I'm a bit of a comic nerd (not hardcore or anything.. my budget doesn't really allow for it) but I love stuff with superhero themes.  Go, look, comment, click on stuff.  Apparently the more comments, the more of a chance that it gets featured on the home page.  I'm at 15 clicks right now.

I've got a few things ready to list soon.  I'm going to try and list a bunch of stuff at the same time, as I don't find I get much traffic listing one or two things at a time.  I have two new switchplates, one featuring Deadpool and one made from an old cover of the cassette version of Guns N Roses Lies EP

.  I haven't taken pictures of these yet.

About a year ago I bought three small pier 1 frames at the Salvation army that I knew i could do something fun with.  Finally inspiration struck, and I came up with these: 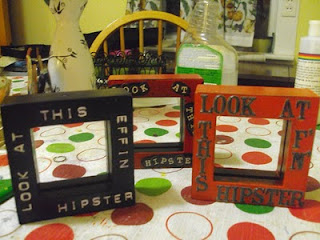 I got the idea from www.latfh.com.  I'm hoping that having pimped their site, they'll hesitate before sending me out a cease and desist order like the one I received from the estate of Shel Silverstein.


It was fantastic staying in last Friday and just having a few glasses of wine and creating.  I have a few painting ideas, and some ideas for coaster sets.  I wish I had thought of this stuff before Christmas, but such is life.  Up goes the tree tonight.
Posted by Andrea L. Cole at 6:08 PM