A step towards self-acceptance.

I bought myself something yesterday. Something I haven't contemplated in nearly 13 years.

Not a two-piece tankini, but a real, honest-to-god 'holy-shit-is-that-my-belly-why-yes-it-is' bikini. To date, I have not reached my goal yet, but when went I went shopping, I looked as I tried on a number of suits, one piece numbers that are generally as a rule either

So I took a shot and tried a few on and thought 'Hey, I don't look half bad.' Yup, there's love handles. Yup, there's a bit of a pouch. Yup, there's a royal whackton of stretch marks. But still, it wasn't bad. So I bought it. And I wore it, around people even. And I will wear it again.

You know what is a nice feeling? Going into a changeroom, trying on a bathing suit and going 'Ugh' but knowing that ugh is not because of your perceived flaws but just that 'damn. That's one UGLY bathing suit.' 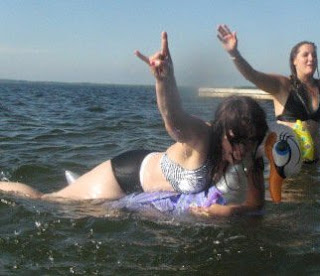