Adventures in home improvement, part one.

So the house I'm currently living in has been in my family for a few years, and has had my parents, my sister and now myself as tenants.

every so often, I am hit with a need to get all DIY with my home improvements. Let's make this clear, *name of carpenter chick from Trading Spaces whose name I can't be bothered to look up*, I am not.

It started a few years ago with some curtains. I bought some curtains but my apartment was not furnished with the.. erm.. furnishings, necessary to hang curtains. Normally, I would call up my dad for help in these situations, but let's face it, he's a busy guy and I found myself saying "For Christ's Sake, Andie, you are TWENTY-SIX YEARS OLD. You do NOT need to call DADDY to hang some friggin' curtains."

In a fit of 'I-can-do-it-myself-dammit-ness' I ran out to Canadian Tire and purchased a Black and Decker cordless drill, and some drill bits and some drywall plugs. I drooled in anticipation as I waited the requisite 12 hours for the battery to charge, before I could do any work. Not only was I going to hang curtains, but I had high hopes for a waist height coat rack in my front hall so the girls could finally hang their own danged coats. ooooh, it was gonna be SUH-WEET. However to my chagrin, I learned a horrible lesson.

Drywall plugs are sent to Earth by Satan specifically with no purpose other than to frustrate and annoy ME. True Story.

Horrible lesson number two? Drywall plugs don't do much when your drywall is only an inch or two above a layer of BRICK.

Long story short, my curtains lasted less than 24 hours. Luckily, where I lived two stories up, backing onto a large forested area. If anyone was going to go to the trouble of looking in my windows, frankly for their effort, they DESERVED a bit of a show. My coat rack lasted about a week. *sigh*

Not to say that it's all been failure. Since i've moved into my little dollhouse there has been cupboard doors hung, knick-knack shelves mounted that have not fallen down to this day, and I've even installed a nice little rack for my hair-dryers and other hair-phernalia. Holy hell, I love making up words.

Today I embarked on a mission to replace the doorknob in the back door that has never quit hung right since the house was broken into, so after a trip to the restore (where I managed to get a nice knob/lock assembly for about $2.50 - take THAT Home Depot) but I've run into a few issues.

A) The hole for the main assembly needs to be filed or sanded down, as the old hole is not quite big enough for the new assembly.

B) Whereas the old knob screwed right into the wood door, the new knob has two screw posts which go straight through the door so that the one side of the knob essential screws right into the other side of itself. In an epic fail on my part, I drilled the two holes about 1/4 to 1/8th of an inch too close to each other, so the posts are further apart than the post-holes. Go Me.

C) The door itself is about a million years old, and solid wood. Solid wood which has started to show some mild rot around the original door knob (which may have contributed to the general shakiness of the old handle).

So I figure my options at this point are:

A) Get a new door. Don't really want to do this, as it's probably pricey. Being me, I also stand a good chance of measuring improperly and ending up with a useless door.

B) Redrilling the whole slightly closer (the difference is almost imperceptible until you try and jam that sucker into the drill holes), running the risk of cracking through the soft wood.

C) Filling in the holes and trying again a couple inches down, which could prove to be a pain in the ass, ergonomically, and especially frustrating if I Just manage to bork it again anyway.

Stay Tuned.. this could get interesting... 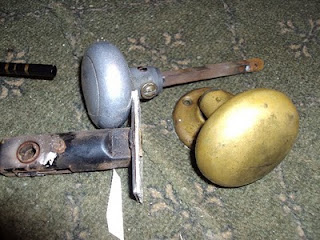 The original doorknob assembly, now detached from the door. 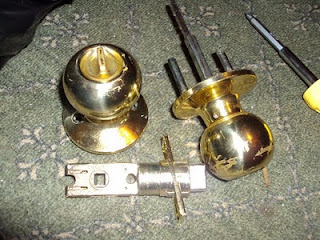 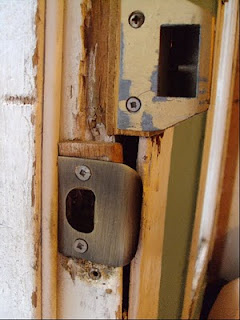 The doorjam part. Hell, I don't know what it's called. The wood has been built up with scraps, since a good portion of it got ripped out when the house got broken into a few years back. That's the new piece in there. 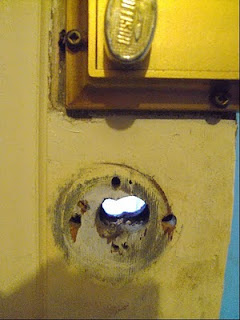 Hole for the original attempt. Glad to see that whoever installed the original door was about as skilled as I am. 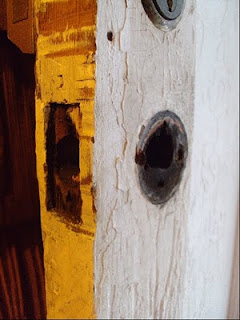 You can see the black from the wood-rot here. The hole on the left (the one that needs to be closer) is already precariously close to the main hole. Gooooood times.
Posted by Andrea L. Cole at 8:36 PM