I want to start writing more. A friend convinced me this evening to start work on a film script based on a premise that another friend and I had cooked up long ago. It's very loosely based on actual events, and fodder for one of those zany comedy films. Production rights go to the first who can get Tina Fey to play me.

I make various attempts at writing but find I have a difficult time finishing anything I start. I have an excellent middle, or a beginning, then struggle to make the other parts fit. A story I started six months ago, borne out of much rage and hurt that I was feeling at the time, started out strong, but as my feelings towards the people in my real life whom the characters were based mellowed, I've lost the emotions that drove my inspiration and as a result the direction that I was taken changed and kind of stalled.

Maybe this is why I'm feeling restless lately. It could be strictly hormonal, but I feel as though I'm on the verge of breaking out of what could be described some days as a rut and others as a comfortable routine. I think it's because winter is coming soon and I need something to occupy me during the long months when I tend to become depressed and feeling invisible. Last winter I had a lot of drama and such on my plate, but for the first winter in a long time, I was anything but depressed. Sometimes boredom can be worse for the psyche than stress.

Boredom = Nothing.
Stress = Something.

Remember that movie, the NeverEnding Story and how the Nothing was slowly destroying Fantasia? I've always interpreted (as I imagine many others have too.. it's not exactly a subtle metaphor) Fantasia as a metaphor for the imagination. 'Nothing' destroys imagination, inspiration. Drama, though at times unpleasant, is something.

Boredom = Nothing
Drama = Something
Boredom destroys imagination, Drama, whether positive or negative, is inspiration, if properly harnessed.

Not that I'm going to go out seeking it. But I want something that's more than nothing. I'm restless is all.

My pants don't fit. Again. This is fabulous. Except that I'll probably need to go shopping for new pants AGAIN in a couple of weeks. Thank Christ for thrift stores.

The long, often frustrating struggle with the weightloss is paying off. I'm in better shape than I've been for years. I need to work on this body dysmorphia I seem to have developed, because I still see the same person in the mirror that I was 2.5 years and 50+ lbs ago. Although I've gained some level of confidence... it's still based on what people have told me. I don't see it, unless I look really really hard. 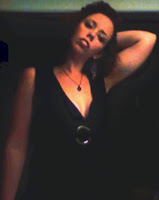 Frankly, I get annoyed with myself anyway for not always liking how I look, because the intelligent part of me knows that there are so many other things that are more important in life. But I still want to feel beautiful in my own skin. It comes and goes, fleetingly. Mostly I still feel like an awkward 14-year-old most of the time. It's something I'm trying to work on.. I'd love to be one of those women that no matter their shape or size, will walk into a room knowing that they are sexy as hell, inside and out. I know it, I just don't KNOW it. I'd like to realize it before it's no longer true. :-P
Posted by Andrea L. Cole at 10:24 PM