The best feminist children's book ever. 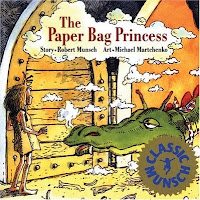 If you grew up in the 80's, in Canada especially then it's likely you are no stranger to the wonderful stories of Robert Munch.  I had a collection of teeny-tiny pocket versions of his books, which tended towards simple but humorous plots (a dad who sleepwalks,

a kid who won't wear his ugly snowsuit

, a kid who won't go to the bathroom until the last minute

) and cute illustrations generally provided by Michael Martchenko.  As soon as my kids were old enough to focus their eyes on a book, I began collecting anthologies of Munsch's work so that I could share them with my kids.

Somewhere in the time between being a six-or-seven-year-old with a profound love of reading and a thirty-something mother-of-two I happened to learn a bit about the media and about feminist theory and social constructionism and how gender portrayals in the media tend to affect us.  So upon revisiting what is possible Munsch's most well-known work (aside from that unholy tearjerker that everyone sadist likes to give expectant mothers at baby showers, Love You Forever

) I was pleasantly surprised to find a strong feminist message in this story about a princess who outsmarts a dragon to save her beloved.

Let's recap, shall we?  Princess Elizabeth is slated to marry Prince Ronald.  Oh, he's cute and all and she's rather smitten.  So it's understandable that when the dragon comes and destroys her (yes.. *her*) kingdom and carries off Prince Ronald, she is eager to get him back.

The book gets its title from how after her kingdom is burned to smithereens all Elizabeth has left to wear is an old dirty paper bag.  This comes into play later in the story.

By way of her intellect, Elizabeth tricks the dragon into exhausting himself by performing various dragonesque stunts until he collapses, leaving Prince Ronald unguarded.  Pretty clever, no?  Not even clever 'for a girl'.  Just clever.

Here's the rub.  Rather than showing some gratitude towards Elizabeth for saving his useless ass, Prince Ronald turns his nose up and tells Elizabeth that she is a mess and should come back when she 'looks more like a princess.'  Rather than fret and be all apologetic for not living up to Ronald's gender and class expectations, Elizabeth firmly but respectfully informs Ronald that he's a narcisisstic asshat (my words, not hers.. this IS a children's book.  Elizabeth, I believe, calls him a 'bum') and lives happily ever after, ON HER OWN (or at the very least, without the company of the insufferable Prince Ronald).  This is the impression we're given anyway, between the line "And she didn't get married, after all" and Martchenko's illustration of Elizabeth walking off into the sunset, clicking her heels with joy.

So we have a princess who uses her wit and resources at hand to show concern and come to the aide of those around her, undeserving as they may be.  Her kingdom is describe as her own.  She outsmarts the dragon without doing harm to him, so she is an empathetic character.  She is able to recognize that her own self-worth is of higher importance than marriage to a prince.  Let's also add that this is not the stereotypical 'beautiful' princess.  Elizabeth is pretty in an average, relatable*  sort of way.

I love that the message in this book is not an overtly preachy one, and is one that is universal to anyone of any gender, ethnicity, class etc... Be resourceful, and you are not obligated to people who disrespect you.  The fact that Elizabeth is conceived in such a brilliantly simple manner as a Strong Female Character - that is, strong in character and intellect, not necessarily just a more ass-kicking object for the male gaze - is what makes this an excellent feminist children's book.

*I'll concede that Elizabeth may be more relatable if you're a little white girl.  However, Munch has made a point of incorporating characters of many ethnicities in his stories, generally without resorting to stereotyping
Posted by Andrea L. Cole at 7:33 PM