The pain of age and impending cultural irrelevance.

I'm gettin' old.  I'm training a new guy at work on the system I work on and I had expressed excitement about the Finger Eleven show that I'm going to tomorrow night.

Blank stare.  No idea.  This is not the first time my cultural references have gone over the young lad's head.  Some of my references are pretty obscure but I thought this'd be an easy one.  No such luck.  So we had a laugh and I mentioned that it made me feel kind of old.

Not as old as this, however: 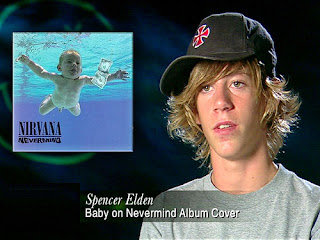 I mentioned feeling old when I saw this.  He didn't know who Nirvana was.  I was in shock.  I had to explain who they were and how Kurt Cobain's suicide was one of the uniting events in the adolescences of my particular age cohort.

When you figure this all took place around '92/93 it doesn't seem like that long ago.  It's when you figure his death was EIGHTEEN YEARS AGO that I start to go "Oh.. fuuuuuu.  I'm OLD.  Like, older than Dirt

(which, incidentally, also came out around the same time)."

Is it sick that part of me secretly hopes that this is not so much a case of my own impending irrelevance but maybe a situation where maybe my co-workers parent's kept him in a closet for the better part of the formative years?  Yeah, it's probably really sick.   Add another bouncer and a VIP lounge to my special place in Hell.

If you're reading this, I don't REALLY hope you were locked up for the better part of your life by your parents and if you were, I'm sorry, that's horrifying.

It's probably even more sick that this scenario puts me in mind of one of my favorite Kids in the Hall sketches:

So the rules for this one are as follows:

So all these random facts get overwhelming but I'll see what I can do.. I'm gonna get back to y'all on the recipients, as it may take me a while to pick em all.

Email ThisBlogThis!Share to TwitterShare to FacebookShare to Pinterest
Labels: blogging, concerts, life in general, music, pimping, pop culture, The awkward, this shit only happens to me, work