So back when I was in school, I bought and/or procured a shit-load of books, mostly those that had been mentioned in class, with the intention of reading them.  The snag was that while in school, I never had time read anything other than the required texts for my classes.  Once I graduated, my brain went into sleep mode and I wanted nothing more than to immerse myself in comic books, suspense thrillers and Harry Potter.

I was burnt out.

I also starting blogging and reading blogs a lot more in this time so my reading materials mostly consisted of other blogs and my books got sorely neglected.  So five years later I'm getting back into reading some of those more 'meaty' books I picked up in school. 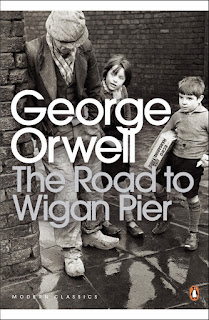 I just finished "The Road To Wigan Pier" and I was struck by how a book that was published over 80 years ago holds relevant in many ways today.  Some of the parallels I found between his descriptions of the unemployed in Britain in the 1930s and prevailing attitudes toward the unemployed and working poor at the time similar to some of the misconceptions the Occupy movement attempted to address this past year.  Namely the idea that the unemployed don't want to work.  Both Orwell and the Occupy movement pointed out that most unemployed are willing to work, were the the work there and available at a living wage.

The book comes from a very pro-Socialism standpoint.  His thesis seems to be that unless a lot of people embrace socialism very soon, the only alternative will be Fascism which, to paraphrase, is basically Socialism without any of the good stuff.  He points out a few reasons that people at the time were hesitant to consider it, despite agreeing with many of the ideals.  One argument, that could easily applied to today and the tendency of lower-middle class to accept the fallacy of trickle-down economics, is that the class-conciousness of the time meant that people who, by upbringing, considered themselves 'middle-class' (described by Orwell as 'those who pronouce their aitches') were being pushed into the working class by way of economics.   One who was raised to think of themselves as a higher class than the working class may, out of fear of 'losing their place', be apt to align themselves with systems that benefit the rich, than systems that are actually more likely to be in their own best interests.

The other issue Orwell brings up is the tendency to avoid Socialism out of a desire not to align oneself with the prevailing ideal of what it means to be a "Socialist".  The caricature of the pistachio-shirted, sandalled, stuffy, boring, intellectual type is similar to the image of the man-hating, hairy-legged butch lesbian who will scream at someone who holds doors that causes many people to say "Yeah, I believe men and women should have the same rights, but I'm not a feminist..."

(For the record, I fully identify as a feminist, but I am still grateful when someone holds a door for me.. why?  BECAUSE IT'S A NICE THING TO DO, NO MATTER WHO YOU ARE.)

Long story short, I found this book a hell of a lot more interesting than I had originally thought I would.  The descriptions of the daily lives of the British coal miners and the living conditions of the unemployed of the working poor at the time made me look around at all I have and thank Gord for what I have.  The later parts of the book where he describes the machine age and its effects on the human population had me nodding in agreement, as many of the passages could easily have been written today.
Posted by Andrea L. Cole at 1:01 PM

Email ThisBlogThis!Share to TwitterShare to FacebookShare to Pinterest
Labels: books, feminism, Heck Yes Sociology is Awesome, I'm geeking out over here, I'm gonna go ahead and talk about stuff I know little about, politics, social issues