Putting off my housework

So, StephC at Seriously??... Reeeally?... Seriously? recently posted this fun little blog survey, so because my house is a mess and I'm always up for a reason to put stuff off and be surrounded by filth and entropy, I'm going to steal it from her and let y'all have a little more insight to yours truly.

1. Do you collect anything?  If so, what and how long have you been collecting?

I have a stupid number of concert and band T-Shirts.  I didn't really set out to collect them, I just have a hard time getting rid of them.  I generally pick one up everytime I see a new act.  Sometimes it's the headliner, sometimes the opener, sometimes whoever I thought put on the best show.  A few of them were purchased in retail stores, or given to me.  It's become a collection based on the fact that I absolutely HATE getting rid of them.  Once  upon a time I had a wicked cool Ramones t-shirt, but when I was at my heaviest I went through this "I'm never gonna fit any of this shit ever again, I might as well get rid of it" thing and gave away that shirt in the process.  Now I'd totally rock it again, and I don't have it.  I've never gotten over that.

The best shirt-procuring story can be found here

I started in grade 8, with a Pearl Jam shirt I got for christmas that had a caricature of the band.  The oldest in my possesion is the Nirvana shirt I got for my 14th birthday.  I've had it so long it's practically decomposing. Some shirts get recycled once they get to that point.  For example, my Alice In Chains Rooster shirt, ended up on the back of an army coat:

My newest one I got last night when I went to see A Primitive Evolution, a band fronted by a friend from high school. 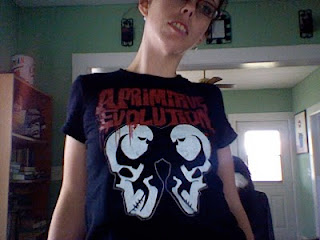 2. What is one cleaning tip you swear by?

Two words.  Child Labour.  Seriously, once they're old enough to understand the words 'Grounded to Infinity' put your babies to work.  They contribute to the mess, they can sure as shit help clean it.

3.  Who would you call for Bail Money?

That's a tough one.  Most of the friends and loved ones who I feel would be willing to help me are probably in no position to do so.  I could probably start some kind of letter writing campaign for amnesty.. I have the sneaking suspicion that if I were ever arrested, I'd probably be some kind of political prisoner.   Unless I got arrested for something really stupid like aggravated assault with a fish.  At which point I might be too mortified to ask for bail money.

4. What is one thing you miss about being a kid?

Being able to wander around a store and look at stuff, while being totally oblivious to the fact that store workers were watching me like a hawk wondering if I was going to start stuffing my pockets.  It's not that store workers don't watch little kids, it's just that I was blissfully ignorant of the misanthropy of the retail sector, and oh hell, the population at large.

5. What are some of your guilty pleasures? Taylor Swift.  I'm going to lose any elitist hipster cred i ever had, but I have an actual physiological reaction to Love Story.. My eyes get moist and my stomach flips with joy when she sings about the boy pulling out a ring and telling her to pick out a white dress.  Sweet jesus, I'm tearing up as I type this.

Guns N Roses.  Mainly because a lot of their lyrics are highly mysogynistic (especially off Appetite for Destruction - or the lyrics to One In A Million in it's entirety) I feel like I'm doing a disservice to my gender whenever I listen to them.  But holy shit, these guys were down, dirty, street urchin rock.  I've also said before that Appetite Era Axl could have shown modern-day gangsta rappers a thing or two, because Axl was a pimp when 50 cent was still at his momma's tit.  You know, before the dreads and the huge amounts of botox.  I'll also add that I won't acknowledge any post-slash GNR incarnation as Guns N Roses.. once you take away most of the band, all you have is Axl and the Randoms.   Velvet revolver had more GNR than GNR does now.

Street Meat aka Hot Dog Cart Hot Dogs.  No matter how many times people tell me what goes in hot dogs, or how animals are killed, I will continue my love affair with hot dogs, especially ones I can buy on the street.

6. how early do you start your holiday shopping?

Ugh.  Let's just say, not as early as I'd like, and leave it at that.  I'm cheap, broke, anti-materialistic and generally not a fan of the commercial end of the holiday season.  So I tend to put it off.  I always think I'm going to do more hand-made and creative stuff for people, but I run out of time.  Blargh.

7. what is a family tradition that you would like to pass on to your significant other/children?

I know a family that was kind of well off, and every year they'd take a third of each kid's gift budget (as in, money that would have gone to gifts for that child) and ask the kid if they knew someone that was in need of help and more importantly that they felt deserved help or something special, a friend, an acquaintance and the kids would pick someone to give that portion to.  I always thought this was a great way to teach kids about giving to others who are in need, and if I ever find myself in a position where giving to my own children is no longer a struggle, then I'd certainly want to do this.

8. What do you consider your greatest achievement?

Getting to where I am now from where I was ten years ago.  Surviving a divorce, and getting a university degree while raising two small children and dealing with various health problems and a broken marriage.  Learning to take better care of myself, both physically and emotionally, and becoming a much stronger person for it all.  Negotiating a custody situation that could have been utterly hellish and caused my kids a lot of problems into something workable and generally beneficial for all involved, especially the kids who are turning out to be two kind, intelligent and funny little girls.  The kids are alright.

9. What do you do to pamper yourself?

About once a year I get a full manicure-pedicure.  Usually I do this as my anti-valentines day tradition, because hell, I LOVE ME.  I was with someone this year for VD day so my yearly pedicure was put off until June when a friend came to visit.  On an average week I like to get a bottle of wine and some nice cheese and crackers and listen to the radio and paint.   Or I'll sneak over to my parents place and steal their tub for a long hot soak.  I don't have a tub.

10.  if you were to start your own restaurant, what would it be called?

Have never really considered opening a restaurant, but I have a not-really-secret desire to open a bar.  Our area is sadly devoid of any night-life whatsoever, and I have a general disdain for run-of-the-mill club music while at the same time having a huge love of dancing.. just don't like to dance to the stuff most club Dj's seem to want me to dance to.  One of my friends and I always joke about "when we open our bar".. each time it's a little less jokingly.  If it were all up to me, my bar would be smallish, have a good dance floor, and a stage.  We'd have local talent play and other nights would be retro nights and indie music nights.   There'd be couches and pool tables.  We'd have top notch security to keep the teenagers and the fuckheads who want to fight and break shit out (because that's how bars get closed down.. underagers and fighting) Rock posters and artwork would abound. Oh and I'd totally steal the idea I saw in this punk bar in Hamilton where they had the washrooms wallpapered in comic book pages.  That shit was suh-weet.

I don't want to say what name we've thrown around in case I jinx it.  I just want to have an alternative to the one lame ass bar we have here, and the Legion.


So that's that.  As Steph put, if anyone feels the urge to do this, link me in the comments below.
Posted by Andrea L. Cole at 7:49 PM

Email ThisBlogThis!Share to TwitterShare to FacebookShare to Pinterest
Labels: blogging